The murder of Memphis rapper Young Dolph was followed by claims on social media that relatives of Blac Youngsta and Yo Gotti, two musical contemporaries, were targeted in retaliatory shootings. The claims are false, Memphis police told AFP, and images shared as proof were, in fact, from the scene of Young Dolph's death.

"The whole #Memphis is going crazy right now, allegedly #BlacYoungsta grandmother's house has been shot up along with #YoGotti mamas restaurant," claims a Facebook post from November 17, 2021, the day Young Dolph was shot dead at a local bakery. "That Get Back For Dolph Finna Get Serious," the post adds. 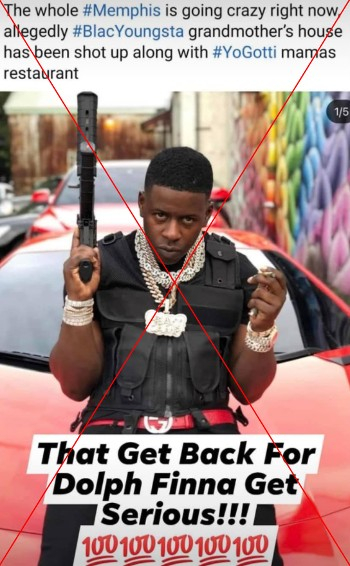 Young Dolph, who was 36, had millions of followers on social media and an album, King of Memphis, that hit number 49 on the Billboard 200 chart. His death was mourned by celebrities including Lebron James, Megan Thee Stallion, and Chance The Rapper.

However, the families of fellow rappers Blac Youngsta and Yo Gotti were not the subject of shootings in the hours that followed.

"The reports of a grandmother's house and a restaurant being shot up are false," Sergeant Louis Brownlee, spokesman for the Memphis police department, told AFP of the claims, instead encouraging people who may have information on the shooting of Young Dolph -- real name Adolph Robert Thornton Jr -- to call CrimeStoppers.

On videos allegedly showing police cars outside Blac Youngsta's grandmother's house as evidence, Brownlee said that the footage was "from the scene of the shooting (of Young Dolph)."

Brownlee declined to comment on past tensions between the three rappers. In a statement on the day of Young Dolph's death, the Memphis police chief CJ Davis said: "Tonight we strongly encourage everyone to stay home if you do not have to go out."

Within hours of Young Dolph's death, social media users suggested Yo Gotti and Blac Youngsta were implicated -- despite no arrests being made -- citing a past feud between the three going back as far as 2014, according to local newspaper The Commercial Appeal.

In 2017, Blac Youngsta turned himself in to the police for an investigation into a shooting that saw 100 rounds fired into Young Dolph's vehicle in Charlotte, North Carolina. Later that year, Yo Gotti was named a person of interest in an investigation over the shooting of Young Dolph in Los Angeles.