An image of a man exchanging a brown envelope with a policewoman is circulating on social media with claims that this shows an African migrant who was deported from Spain after he found money someone had lost and brought it to the police. However, this is misleading: the photo, which was published in 2020, shows the policewoman returning an envelope full of money back to its owner. There is no evidence the man in question was deported.

The claim has been shared in social media posts with varying captions, but they share similarities, including that the story appeared to be a recent incident.

“This african man called Jibril is an immigrant in Valencia, Spain (sic),” reads the caption of one of the Facebook posts in Nigeria, which has been shared more than 800 times since it was published on November 14, 2021. “Jibril picked an envelope containing €4,250 (Over N2.5m) on one of the streets in Valencia few days ago (sic).”

The man in the photo is standing next to a Spanish flag. Above him hangs a portrait of Spain’s king, Felipe VI. 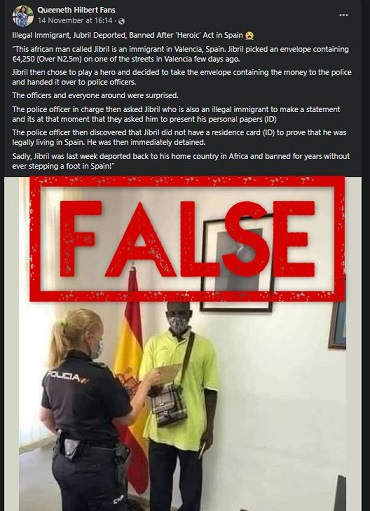 The post goes on to mock the man for purportedly taking the recovered money to the police, who then discovered he was undocumented.

“He was then immediately detained,” it reads. “Sadly, Jibril was last week deported back to his home country in Africa and banned for years without ever stepping a foot in Spain!”

However, AFP Fact Check found that the real story is quite different.

Spanish daily newspaper ABC reported on August 14, 2020, that an unknown man found the sum of €4,250 and brought it to the police station, where it was later recovered by the owner — the man in the picture.

“A police woman gives back the money to the man who had lost it,” reads the English translation of the photo’s caption on ABC’s website.

This incident was reported on the same date by other Spanish media outlets, including 20 minutos and elperiòdic. These articles were based on an August 14, 2020 press statement by the Spanish police. 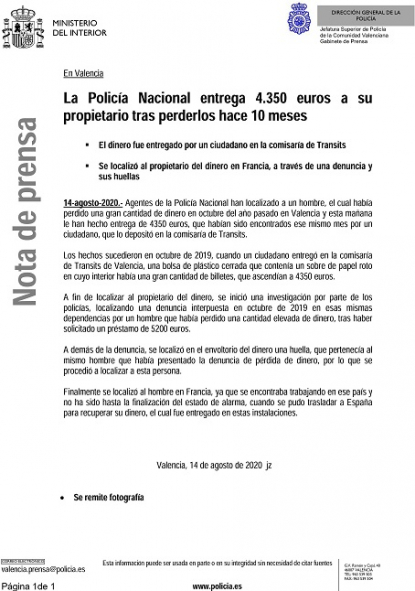 Screenshot of the press release by the Spanish police

“The events took place in October 2019, when a citizen handed over to the local traffic police in Valencia a closed plastic bag that contained a torn paper envelope in which there was a large number of banknotes, totalling 4,350 euros,” the statement explained.

“In order to locate the owner of the money, the police launched an investigation and then found a complaint filed in October 2019 in the same premises by a man who had lost a large sum of money, after contracting a 5,200-euro loan.”

The statement further explains that the money’s owner was found by using a fingerprint on the envelope.

“The man was located in France, because he worked there, and we had to wait until the end of the state of emergency when he finally could come to Spain to get his money back,” the statement read.

When contacted by AFP Fact Check, the Spanish police authorities said that the money was returned to the man on the same day the statement was released. They did not share any information on the man’s identity.

The Spanish national police originally published the photo on Twitter on August 18, 2020.

“An exemplary citizen brought us in Valencia 4,350 euros that he found in the street,” reads the Spanish-language tweet. “We launched an investigation and managed to return the money to its legitimate and grateful owner.”

AFP Fact Check previously debunked another claim in French here that misrepresented this photo as showing a man who returned money to police, but without alleging that he was deported.