Skip to main content
Children stand next to a bunch of bananas in Dansha, Ethiopia, on November 25, 2020. ( AFP / EDUARDO SOTERAS)


A video is circulating in social media posts around the world warning it shows a "Helicobacter worm" in bananas imported from Somalia. The claim is misleading; experts told AFP the footage did not show a worm, while authorities in various countries have urged the public to ignore such warnings.

"Recently, 500 tons of bananas from Somalia arrived in the markets, which contain a worm called Helicobacter that releases poisonous bananas in the stomach, which then shows the following symptoms (diarrhea, vomiting, nausea, headache) and after 12 hours the person will die from brain death," reads a Facebook post from November 3.

"Please refrain from buying and eating bananas these days, or if you do buy, be sure to open them inside. Watch the video."

The video appears to show a man opening up a banana to reveal a worm inside. "Be careful when you eat bananas," he says in French. 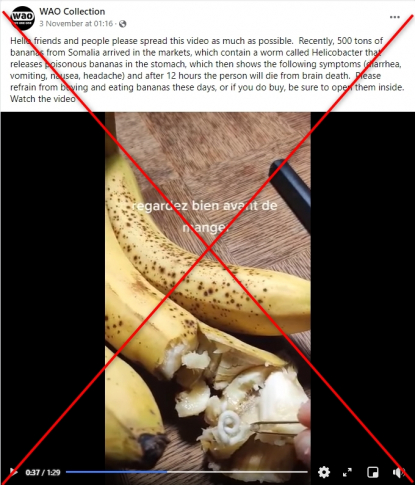 While AFP could not independently verify the origin of the video, experts said the creature in the video was not a "Helicobacter worm".

"It is not a worm or a parasite. Helicobacter is a bacterium," Sixto Raúl Costamagna, a parasitology specialist from Argentina told AFP.

He said Helicobacter infection could cause digestive problems, such as ulcers.

Ignacio Silva, an infectologist at Barros Luco Hospital and the University of Santiago in Chile said the bacterium is not visible to the the naked eye and can only be seen under a microscope.

Helicobacter infection affects around two-thirds of the world's population, particularly in developing countries, according to the US Centers for Disease Control and Prevention (CDC).

Fabricio Loyola, an Ecuadorian agronomist and member of the College of Agricultural Engineers of Pichincha said the creature emerging from the banana in the video appeared to be "fibers", suggesting the banana had a ripening problem.

"When the banana is 'force-ripened' [when its ripening process is accelerated], the white, edible part of the fruit does not reach its proper sugar content and transforms into fibrous tissue,"he told AFP.

He said that "such a giant larva" as seen in the footage was not realistic.

According to the Banana Market Analysis 2019, published by the United Nations's Food and Agriculture Organization (FAO), Ecuador, the Philippines, Costa Rica and Colombia are the world's largest banana exporters.

In Africa, the largest banana exporters are Ivory Coast and Cameroon and their product are destined for the European market. The document does not mention Somalia.

The east African country was a major regional banana exporter until the outbreak of the Somali civil war in 1991.

Somalia resumed banana exportation in 2019 to Saudi Arabia and in 2020 to Turkey, while conducting trial exports to Qatar and Oman in the same year.