Skip to main content
A child wears a pin she received after receiving her first dose of the Pfizer Covid-19 vaccine at the Beaumont Health offices in Southfield, Michigan on November 5, 2021 ( AFP / JEFF KOWALSKY)

Social media posts share a picture of a bus advertisement about paediatric stroke awareness in Canada and suggest it is related to Covid-19 vaccines. But the ad has nothing to do with the shots, and health authorities and independent experts say available data does not show a causal link between mRNA vaccines and strokes in children.

"Look at this programming! Unless they've been jabbed, KIDS DONT HAVE STROKES!!," claims an October 28, 2021 Facebook post showing a picture of a bus advertisement that says: "Kids have strokes too. Know the warning signs." 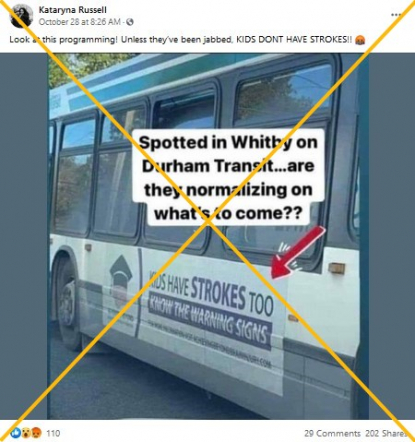 Other posts share a purported note from the London Health Sciences Centre in Ontario indicating that a special protocol for managing strokes in children was implemented in mid-October. 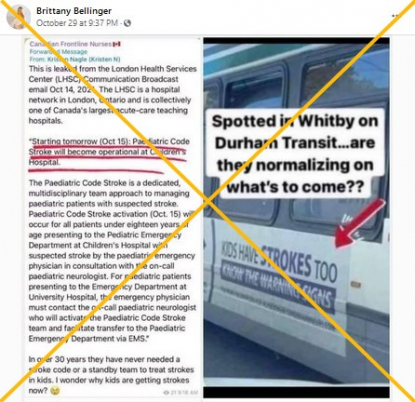 The posts, which imply that the ad and the hospital protocol mean health professionals are bracing for a surge of paediatric strokes with the potential upcoming authorization of Covid-19 vaccination for children aged 5 to 11 in Canada, are misleading. They are part of a pattern of inaccurate information about vaccines circulating online and user comments magnify the suggestion that Covid-19 shots are unusually dangerous.

In some of the posts, it is clear that the bus ad was sponsored by the Achieving Beyond Brain Injury foundation. Contacted by AFP, the foundation said its awareness campaign had nothing to do with Covid-19 vaccines.

Nadine Vermeulen, a spokeswoman for the non-profit, said: "We learned that our bus campaign was 'hijacked' by certain individuals and groups and claiming that we are part of some government conspiracy to normalize pediatric stroke... This is so far from the truth."

She explained that the foundation was created to raise awareness following a stroke suffered by both her 10 year-old son and her partner's 14 year-old son long before the coronavirus pandemic.

"We don't know why our kids had strokes but we do know their strokes had nothing to do with Covid as 2015 and 2018 were well before the outbreak," she said.

"The claims these individuals and groups are making that our bus campaign has anything to do with the vaccine or Covid in any way are completely false. By using our campaign in any way other than as its intended purpose to raise awareness is diminishing what our kids went through and will continue to go through, what we as their families went though and will continue to go through and what our foundation is truly meant to be," she said.

The London Health Sciences Centre (LHSC), also said that the Paediatric Code Stroke was initiated long before the Covid-19 pandemic.

Sara Wilson, a spokeswoman for LHSC, told AFP: "The Code Stroke at LHSC was initiated in 2018, prior to the start of the pandemic in March 2020... through strategic collaboration and planning with hospital leadership, (it) officially launched this year."

She said that the concept of introducing a Paediatric Code Stroke at LHSC began out of a need for better and quicker access to an adequate team for local children who previously had to seek treatment at a Toronto children's hospital, nearly 200 kilometers away.

"Although infrequent, acute strokes in children can happen and this ensures LHSC is equipped to provide necessary life-saving treatment. Paediatric Code Stroke is a dedicated, multidisciplinary team approach to managing paediatric patients with suspected stroke," she said.

Dr Jesse Papenburg, a pediatric infectious disease specialist at the McGill University Health Centre-affiliated Montreal Children's Hospital, told AFP on November 16: "Delays in adequate treatment are associated with higher outcomes or risks of complications. The fact that there is a pediatric hospital developing such a team is not at all alarming."

No evidence of link to Covid-19 jab

According to Johns Hopkins Medicine, paediatric stroke affects one in every 4,000 newborns and 2,000 older children each year. At this point there is no data to suggest a causal link between the rare condition and the Covid-19 vaccines, according to experts.

Jessamine Luck, a spokeswoman for the University of Toronto-affiliated Hospital for Sick Children (SickKids), one of Canada's largest, said on November 17: "There is no evidence linking the Covid-19 mRNA vaccines to paediatric strokes.

"Paediatric stroke is very rare and, like stroke in adults, is caused by a blockage of blood vessels in the brain. This can occur for a number of reasons including underlying medical conditions such as heart disease or blood clotting disorders, as well as head trauma or serious infections in the head and neck."

Montreal Children's Hospital's Papenburg agreed that strokes in children are often due to factors such as chronic underlying medical conditions, hereditary predispositions, trauma or infection.

He said that the claims linking Covid-19 vaccines to paediatric strokes "are in no way based in fact."

"There is no reason to believe from these clinical trials that such a side effect could occur in this population," he explained, referencing data submitted prior to the authorization of the Pfizer-BioNTech Covid-19 vaccine for children aged five to 11 in the United States.

He said that because children's immune systems react more vigorously to the vaccines, a smaller dose is used for the paediatric version of the shot (about a third of a regular dose).

"One of the advantages of having a smaller dose is that you tend to have fewer side effects than if you were to use the full dose. And that's what we saw with the Pfizer product for 5-11 year olds, the side effects were less frequently seen than in adolescents and adults, and the most common ones are similar."

These transitory side effects can include pain at the injection site, fatigue, and fever, but "no serious adverse event has been recorded," he said.

Before approving the jab, the US Federal Drug Administration concluded that "no serious side effects have been detected in the ongoing study."

Rare cases of myocarditis and pericarditis following vaccination with mRNA-based jabs have been observed, but the Canadian government says most cases are mild and patients recover quickly. It points out that patients face a higher risk of cardiac complications, including myocarditis, "following SARS-CoV-2 infection."

The AstraZeneca and Johnson and Johnson shots, which are not approved for children, have also been associated with rare cases of blood clots. These viral-vector-based Covid-19 vaccines use a different technology than mRNA-based shots by Pfizer-BioNTech and Moderna. Health Canada concluded that the benefits of vaccination outweighed the risks.

Papenburg credited surveillance systems and information sharing between countries with catching any rare adverse events. He expressed confidence in the safety of the shots, saying: "Covid vaccines are the most scrutinized medical intervention in the modern era of medicine."