An image of a badly damaged pier has been circulated in numerous social media posts claiming it shows the state of the Third Mainland Bridge in Nigeria’s commercial hub Lagos. The posts allege that the bridge has “opened up” and is “shaking”, potentially putting the lives of commuters at risk. However, the claim is false: the photo was taken back in 2008 during an experiment conducted by a Japanese research institute to test the effects of earthquakes on bridge piers.

One of the earliest versions of the claim was published on November 9, 2021, about a week after a high-rise building under construction collapsed in Nigeria's commercial capital Lagos.

Since this incident, concerns about the safety integrity of buildings in the megacity have become a major talking point on social media in Nigeria.

“We have just been informed that part of the 3rd mainland bridge has opened up and the bridge is shaking,” reads the caption on one of the Facebook posts showing the damaged pier, which has now racked up more than 4,400 shares. 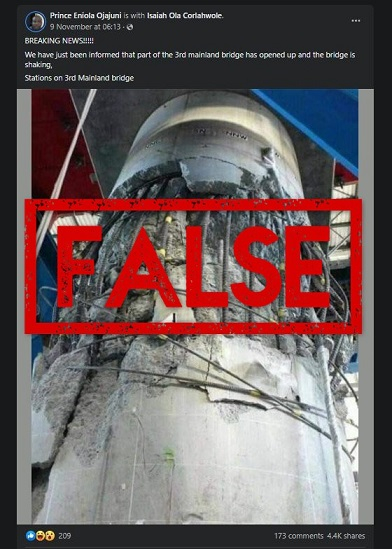 The same claim has also been shared with other images. Social media monitoring tool CrowdTangle shows that posts also include footage from a 2019 news report when some portions of the bridge, including the expansion joints, were indeed failing. AFP Fact Check debunked this claim here.

Some posts, such as this one on Facebook calling for government action to avert a disaster, combine both the pier photo and screenshots of the old video report.

The Third Mainland Bridge is Africa’s second-largest bridge, extending nearly 12 kilometres (7.5 miles) to link Lagos Island, the business heart of the city, with the mainland where most people live.

When the bridge was built in 1990, Lagos had just six million residents. Today, its population has more than tripled and the bridge sees tens of thousands of vehicles crossing each day.

Fears about its safety and lack of maintenance have long been part of Lagos folklore, prompting the government to partially close the Third Mainland Bridge for repairs last year. However, AFP Fact Check found that the circulating image is unrelated to the bridge.

First, the piers supporting the Third Mainland Bridge are rectangular in shape, not circular like the one pictured in the social media posts. 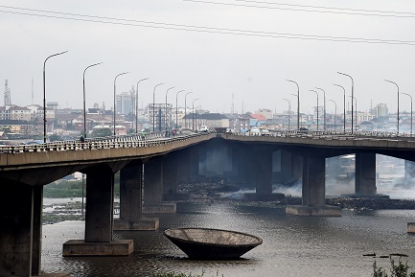 An image taken on July 28, 2020, showing a section of the bridge closed for repairs ( AFP / Pius Utomi EKPEI)

AFP Fact Check conducted a reverse image search and traced the origin of the image to the website of Japan’s National Research Institute for Earth Science and Disaster Resilience.

“A shake table experiment of full-scale RC [Reinforced Concrete] bridge pier was conducted,” reads the caption on the photo. “The pier was designed as a reinforced concrete bridge column”. 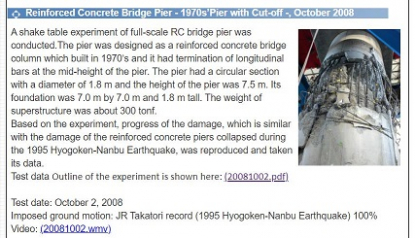 The research institute explains that the experiment was carried out on October 2, 2008.

The site also includes a video of the experiment, which shows a giant machine violently shaking until a lone concrete pier— which is not attached to any bridge — cracks under the pressure. 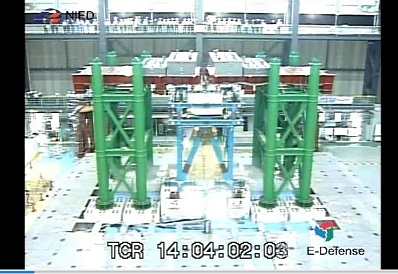 Screenshot showing the pier surrounded by the machine

The clip matches the photo: there’s a blue steel beam near the top of the pier, and red beams up above. Moreover, the pier cracks in a distinctive manner.

AFP Fact Check has contacted the National Research Institute for Earth Science and Disaster Resilience for additional comments on the experiment and will update this report when we receive a reply.

Meanwhile, Nigerian authorities have dismissed the claim as false.

“The Federal Controller of Works in Lagos, Engineer Olukayode Popoola, has debunked insinuations making the rounds in the social media that the Third Mainland Bridge in Lagos has ‘opened up’ and [is] ‘shaking’ and, therefore, unsafe to traffic saying the claim was both false and unfounded,” reads part of a statement published on the website of Nigeria’s ministry of works.

AFP Fact Check’s reporters have repeatedly travelled across the bridge and found no evidence of any visible damage or “shaking”.