Footage of a news report on the state of the Third Mainland Bridge in the country’s megacity Lagos is circulating on social media with claims that the bridge has “opened up” and is “shaking”, potentially putting the lives of road users at risk. However, the claim has been shared out of context: the report was aired in 2019 and the bridge has since been repaired. A site visit by AFP Fact Check confirmed this.

The footage bearing the logo of Nigerian broadcaster Channels Television appears in this Facebook post with more than 230 shares. The post raises safety concerns about the busy Third Mainland Bridge in Lagos while calling for government action to avert a disaster.

“This is Third Mainland Bridge (sic),” reads the caption on the Facebook post published on November 9, 2021. “To avoid stories that touch the heart, the Federal Ministry of Works should invite professionals and do the needful.” 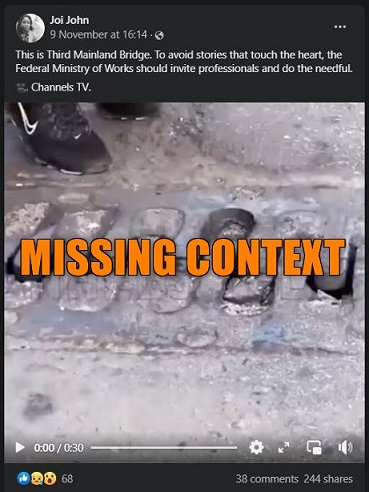 The 30-second footage shows a reporter on the bridge, pointing out what appears to be an expansion joint that’s visibly moving as vehicles drive over it. 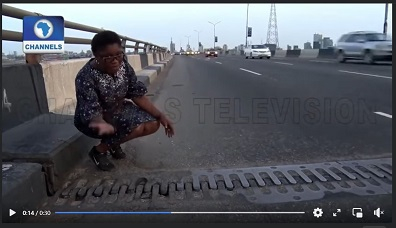 Screenshot showing the reporter close to the vibrating expansion joint

The reporter explains that even though the portion of the bridge had begun to sever, “causing a lot of shaking and vibration”, authorities had allayed fears about its safety.

“People are advised to avoid the bridge and use an alternative routes available to avoid major disaster (sic),” reads another post shared with the same footage.

Unlike online posts fretting about the safety of road users, others such as this one on Facebook — where the accompanying video has been viewed nearly 700,000 times — urge the government to fix the problem before it gets worse.

But while the footage is authentic, it was filmed in 2019,  predating recent maintenance work on the bridge.

The Third Mainland Bridge is Africa’s second-largest bridge, extending nearly 12 kilometres (7.5 miles) to link Lagos Island, the business heart of the city, with the mainland where most people live.

When the bridge was built in 1990, Lagos had just six million residents. Today, its population has more than tripled and the bridge sees tens of thousands of vehicles crossing each day.

Although fears about its safety and lack of maintenance have long been part of Lagos folklore, AFP Fact Check found that concerns that the bridge poses a risk to road users were first raised in 2019.

These concerns spread online despite the government partially closing the bridge for repairs last year, as reported by AFP. The bridge was later reopened to traffic after seven months, according to Nigerian daily newspaper The Punch. 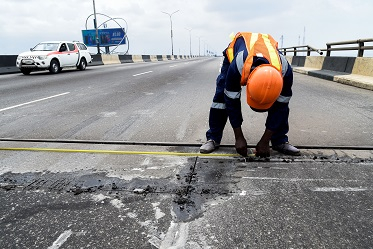 AFP Fact Check traced the source of the video to the YouTube page of Channels Television where it was first published on April 19, 2019.

“‘No Cause For Alarm’ FG Dismisses Concerns Over Third Mainland Bridge,” reads the caption on the YouTube video.

In addition, using keywords from the recently shared posts to conduct a search on social media monitoring tool CrowdTangle, AFP Fact Check found that the exact claim had circulated online with the same footage back in 2019.

At the time, it was true that some portions of the bridge, including the expansion joints, were indeed failing. In fact, Nigeria’s ministry of works said that “it was well-meaning Nigerians who drew the attention of the government to the bridge through comments and videos”.

But there is no evidence to show that the previous issues have flared up again since recent repairs.

Meanwhile, Nigerian authorities have dismissed the claim as false.

“The Federal Controller of Works in Lagos, Engineer Olukayode Popoola, has debunked insinuations making the rounds in the social media that the Third Mainland Bridge in Lagos has ‘opened up’ and [is] ‘shaking’ and, therefore, unsafe to traffic saying the claim was both false and unfounded,” reads part of a statement published on the website of Nigeria’s ministry of works.

AFP Fact Check travelled across the bridge and found no evidence of any vibrating or moving parts as the posts claim.