A post shared on Facebook and Twitter in Ethiopia claims that the African Union (AU) has asked its staff to leave the country due to the ongoing conflict with Tigrayan rebels and their allies. But the claim is false: the AU told AFP Fact Check that it has not urged its staff to leave the country, nor has it asked to relocate its headquarters from the capital Addis Ababa.

“Just in.. internal communication for @_AfricanUnion, staff are told to immediately leave the capital with their valuables until further notice. #Evacuate while you can, as airspace might be closed in the coming days,” reads a tweet published on November 7, 2021, and since shared nearly 200 times. 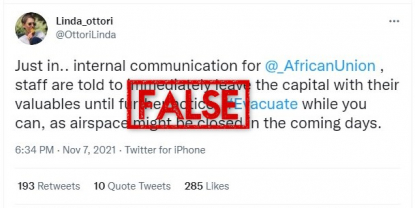 The tweet does not carry any link to the “internal communication” it cites as evidence of notice to AU staff to pack up and leave Ethiopia.

Ethiopian Prime Minister Abiy Ahmed's November 2020 offensive in the country’s northern Tigray region was meant to be a swift military operation, but now it threatens to unleash instability across the country, as fears grow of a rebel advance on Addis Ababa.

Written in Amharic, the caption on the Facebook post translates to: “African Union staff have been asked to leave Addis Ababa Ethiopia immediately. The air space may be closed in the next few days, get out of Addis Ababa when you can”. 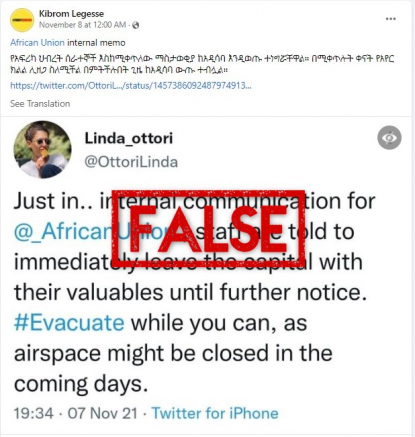 The AU has headquarters in Addis Ababa.

AFP reported on November 3, 2021, that an Oromo group allied to the Tigrayan rebels said that the capital could fall within "months if not weeks".

Hundreds of thousands of people, especially in the Tigray region, face famine conditions under a government blockade meant to deny food and other aid from reaching Tigray rebels.

Despite tensions, the AU denied issuing an evacuation order to staff.

“The claim that the AU has closed its offices in Addis Ababa and asked workers to leave is untrue,” said AU spokeswoman Ebba Kalondo.

Furthermore, on November 11, 2021, four days after the claim was posted on social media, the AU conducted its weekly press briefing from Addis Ababa.

The claim follows hot on the heels of another rumour denounced by the AU in response to social media posts alleging Africa Union Commission (AUC) chairperson Moussa Faki Mahamat had called for the relocation of the organisation’s headquarters in an official document.

“The said report is fake news and has no basis in fact nor form,” read a statement issued by Kalondo on November 7, 2021.

The social media posts also claimed that the country’s airspace was closing imminently.

However, 10 days after the posts were published, flights are still operating in and out of Ethiopia, which was confirmed to AFP Fact Check by Ethiopian Airlines, the country’s main carrier.

“The Ethiopian air space has not been closed in the recent past, our flights have been operating from Ethiopia to several other destinations across the world,” the airline told AFP Fact Check.

US and UK travel advisories

While flights to and from Ethiopia are still operating, some nations have advised their citizens to avoid the country.

On November 6, 2021, the US State Department issued a travel advisory, warning Amernicans against travelling to the country: “Do not travel to Ethiopia due to armed conflict, civil unrest, communications disruptions, crime, and the potential for terrorism and kidnapping in border areas.”

“The FCDO now advises against all travel to Ethiopia, except for Addis Ababa Bole International Airport (where advice remains against all but essential travel),” said the UK’s Foreign, Commonwealth and Development Office.