Video of daredevil 'spinning on helicopter' is computer-generated imagery, not real life


A video that appears to show a person flung into the air after perching on top of a spinning helicopter rotor has been viewed tens of thousands of times in Chinese social media posts. Some people appeared to believe the footage showed an extraordinary stunt. However, the video shows computer-generated imagery created by a visual artist.

The video has been viewed more than 20,000 times after it was posted on October 27 on Chinese video site Bilibili.

It appears to show a person on top of a spinning helicopter rotor. The person kneels down and is flung up into the air as the rotor spins faster.

Text superimposed on the clip reads, "#ROTOR CHALLENGE", while the Chinese-language caption on the post reads "Spiral to the sky". 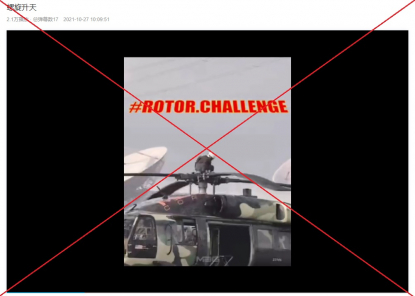 Screenshot taken on November 16, 2021 of the misleading Bilibili post

The same video was also viewed more than 60,000 times in similar posts here and here.

While some online users doubted the video showed a real incident, others appeared to believe it was genuine.

"The person is definitely gonna die", one person commented, while another said that their "brain will be a mess".

However, the video shows computer-generated imagery.

A keyword search on Google found this longer version of the video posted on a YouTube channel called MBG CORE on October 25.

Below are screenshot comparisons between the video in the misleading posts (left) and the YouTube video (right). 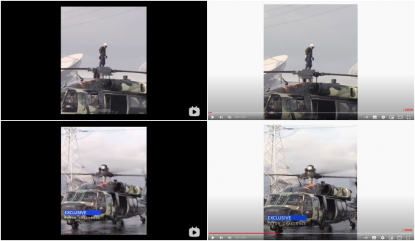 The YouTube video is titled: "ROTOR CHALLENGE BY MBG CORE".

The visual artist behind the MBG CORE accounts Marc Aurélien said the video was computer-generated.

"It's a full 3D render, also the character, everything," he told AFP.

Aurélien uploaded a video showing the animation breakdown here on YouTube on November 16.