Skip to main content
Kyle Rittenhouse (R) talks to his mother Wendy Rittenhouse during his trial at the Kenosha County Courthouse on November 3, 2021 in Kenosha, Wisconsin ( POOL / AFP / Mark Hertzberg)

Kyle Rittenhouse's mother did not drive him to Kenosha shootings


Social media posts circulating during the murder trial of Kyle Rittenhouse claim his mother drove him to the town in the US state of Wisconsin where he shot three people. But the prosecutor trying the case says there is no evidence to support the claim, Rittenhouse and a friend testified about the people who accompanied them and did not list his mother, and she told a newspaper that she was in a neighboring state and did not know what her son was doing.

"Why are we just glazing over the fact that Kyle Rittenhouse's mother put her minor child in a vehicle, drove him across state lines and dropped him off in the middle of a riot armed with an assault rifle? Why is she not behind bars?" says a November 13, 2021 Instagram post. 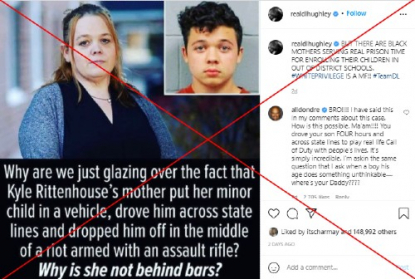 The claim, which also appeared on Facebook in 2021, circulated online in the days after the August 25, 2020 shootings in Kenosha, with some people sharing a photo of an armed woman they claimed was Wendy Rittenhouse. The photographer came forward at the time to say that the image was taken in a different town.

Kyle Rittenshouse is on trial for killing two men and wounding a third during unrest in Kenosha that followed the police shooting of Jacob Blake, a 29-year-old Black man. Rittenhouse faces five counts -- one count each of intentional homicide, reckless homicide and attempted intentional homicide, and two counts of recklessly endangering safety.

But his mother did not drive her son to Kenosha on the day of the shootings.

"There is no evidence that Wendy drove the defendant to Kenosha on 8/25/20," Thomas Binger, the prosecutor in Rittenhouse's trial, told AFP.

While testifying on November 10, 2021, Rittenhouse gave a detailed account of the day of the shootings, and did not list his mother among the people who were present.

"I did go downtown in the morning of August 25th," he said, adding after being questioned by the prosecution: "I went there with Dominick Black, my sister McKenzie Rittenhouse, and Ray Dickhart."

During his testimony, Black said that before noon on the 25th, "me, him (Rittenhouse) and my brother Ray decided to go down to the lake (in downtown Kenosha) and kind of just look at how things were." He did not mention Rittenhouse's mother.

And in an interview with the Chicago Tribune in November 2020, Wendy Rittenhouse said that she did not know what her son was doing on August 25, and that she was in the state of Illinois getting a Covid-19 test and running errands with her eldest daughter.

Media reports about the shootings and the subsequent trial also did not say that his mother drove Rittenhouse to Kenosha.