Skip to main content
Taliban fighters stand guard near the Sardar Mohammad Dawood Khan military hospital in Kabul on November 2, 2021, after at least 19 people were killed and 50 others wounded in an attack on a military hospital. ( AFP / WAKIL KOHSAR)

A graphic photo is circulating in social media posts that claim it shows a woman killed in an attack on a hospital in Afghanistan in November 2021. The claim is misleading; the photo circulated in posts about an attack at the same hospital in 2017.

"Today’s horrific attack in Kabul caused causalities (sic) to civilians & many others like this Afghan Woman," reads a tweet posted on November 2.

"Strengthening a terrorist group like Taliban will never defeat another terrorist activity. To defend national values, we need to support national movements not terrorists!"

The tweet shows a graphic image of a woman with blood-stained clothes lying on the ground. 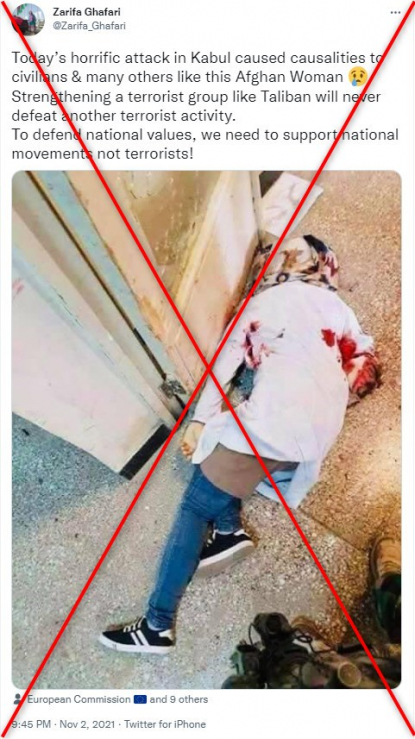 Nineteen people were killed on November 2 when militants from a local branch of the Islamic State group in Afghanistan attacked Sardar Daud Khan hospital in Kabul.

The photo was shared in similar tweets here, here, here and here.

A reverse image search found the same photo shared on Twitter on April 17, 2017.

"The photos of #Kabul military hospital's victims released. Here are just few of them which are publishable. #Afghanistan #ISIS," reads the tweet by journalist Zakarya Hassani.

Below is a screenshot comparing the photo in misleading posts (left) and in a tweet from 2017 (right): 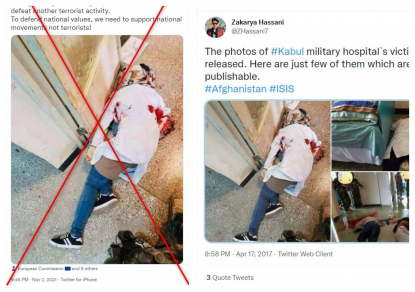 In the same tweet, Hassani posted several photos of other bodies lying on the ground, including one which appears to show soldiers looking on.

Scores of people were killed on March 8, 2017 in an attack on Sardar Daud Khan hospital -- the same targeted in the November 2 attack -- when gunmen dressed as doctors invaded the building.

The defence ministry said around 30 people were killed by the five attackers, but security sources and the survivors, some of whom counted dead bodies, said the death toll exceeded 100.