Facebook posts claim that a proposed bill to amend Australia's biosecurity law targets unvaccinated citizens with forced quarantine and Covid-19 vaccination. The posts are misleading. The text of the bill indicates that the amendments would apply to people arriving in Australia from overseas and states that "force must not be used" to require individuals to comply with biosecurity measures.

"The Government are changing the Federal biosecurity act from 'an individual' to include 'class of people'. This means if this amendment is accepted, the governments can QUARANTINE , INJECT, REMOVE from their home certain classes of people ie unvaccinated," the post reads in part.

"While we understand that these changes are meant to be imposed upon groups arriving into the country by plane or vessels, it does not expressly exclude the possibility of it also being applied to other 'classes' of people such as the unvaccinated, or to certain ethnic, religious or politicosocial groups residing within Australia."

The post links to a petition called, 'REJECT Biosecurity Ammendment Bill 2021', which has attracted more than 150,000 signatures. 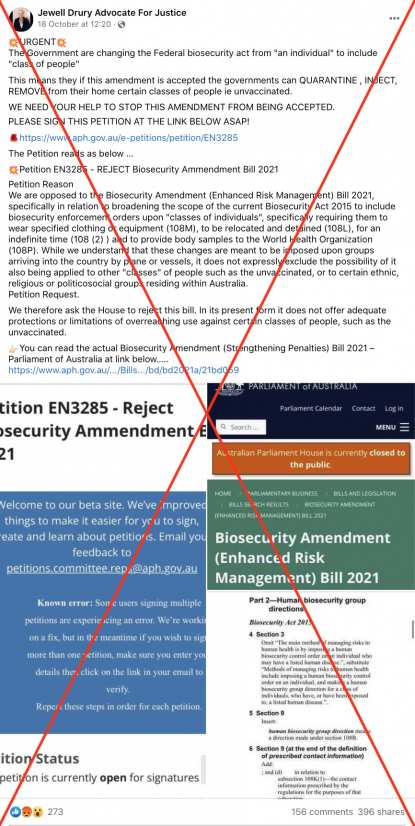 The Biosecurity Amendment Bill 2021 aims to strengthen regulations for international arrivals to Australia to reduce the risk of bringing diseases such as Covid-19 into the country, as detailed in this 'Explanatory Memorandum' about the bill.

The memorandum states that the bill is designed to "effectively respond to and manage biosecurity risks entering Australia through the maritime and aviation pathways".

The proposed bill -- which is yet to be passed as of November 16 -- follows a report into the handling of the Ruby Princess, a virus-stricken cruise ship that disembarked in Sydney in March 2020.

More than 600 passengers and crew were later diagnosed with Covid-19.

That report said authorities should consider expanding biosecurity laws to apply to "persons or groups", rather than simply individuals.

The proposed bill seeks to impose biosecurity measures on people arriving in Australia.

Associate Professor Amy Maguire, an expert on international law and human rights at Newcastle Law School in Australia said the bill applied to people arriving in the country via plane or vessel.

"The amendments proposed in this bill only apply to the limited class of people who are on a plane or vessel or have just exited a plane or vessel and are at or near to a landing place or port in Australian territory," she told AFP.

"The directions that can be made under the proposed amendments include that a group of people must go to a place for a specified time (e.g. a quarantine facility for 14 days), must consent to an examination to determine if they have a listed disease (e.g. a test for COVID), provide a body sample for testing (although the bill specifies that this can only happen with an individual's consent) and some related powers."

The bill also "specifies that no use of force is permitted to compel a person to comply," she added.

The bill states that: "Force must not be used against an individual to require the individual to comply with a biosecurity measure imposed."

However, it does say that those who do not comply will be subject to civil penalties.

A spokesperson for the Australian Department of Health also denied that the proposed amendments paved the way for unvaccinated people to be subject to quarantine, vaccination or removal from their home.

The bill allows authorities to manage groups of people arriving at a port where individuals in a group show signs or symptoms of a "listed human disease", or have been exposed to such a disease, the spokesperson added.

A listed human disease is defined by the Australian government as "a human disease which is communicable and may cause significant harm to human health", such as Covid-19.

"For example, it might be used in circumstances where human biosecurity officials are concerned about a public health risk on board a cruise vessel, and want to undertake additional screening of passengers before allowing them to travel onward," the spokesperson said.

In Australia, Covid-19 vaccines are not mandatory federally, except for residential aged care workers. Certain workers in some states, such as those in healthcare settings in New South Wales, are required to be vaccinated against Covid-19 to continue working.