A graphic shared thousands of times on Facebook in South Africa claims that unemployment among the country’s black population rose from 1.6 million people in 1994, when the African National Congress (ANC) came to power, to 20.9 million in 2020. But the claim is false: figures from the South Africa's data agency indicate that while black unemployment is high and disproportionate, the graphic has exaggerated the situation. 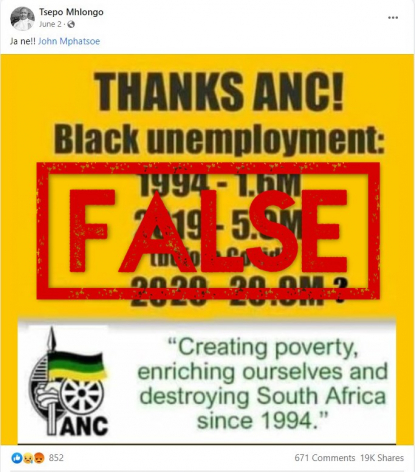 The ANC won 46 percent of the votes cast nationally – by far its worst showing since 1994. This decline in support has followed a trend of rising unemployment, which was already endemic before factoring in Covid-19 lockdowns, as AFP reported during public sector strikes in 2020.

However, the numbers cited in the graphic are incorrect and give the false impression that black unemployment since 1994 has increased more sharply than it has, especially in recent years.

Unemployment is officially defined by Statistics South Africa (Stats SA), the government’s data agency, as anyone from the age of 15 to 64 who is out of work but actively looking for a job. The expanded definition of unemployment further includes those who are discouraged from looking for work or choose not to for other reasons.

According to Stats SA, the country’s official unemployment rate was 32.5 percent (7.2 million people) in the fourth quarter of 2020. Using the expanded definition, this increased to 42.6 percent (11.1 million people).

This compares to 1994 when official unemployment was sitting at 20.5 percent and 31.5 percent according to the expanded definition.

The data from Stats SA indicate that 4.16 million black people were unemployed in 1994 (or a rate of 43 percent) under the expanded definition, and not 1.6 million as stated in the graphic.

Screenshot showing the number of unemployed black South Africans in 1994, taken from a Stats SA survey

By 2019, there were 9.3 million unemployed black people (again, in terms of the expanded definition), almost double the 5.9 million mentioned in the claim. 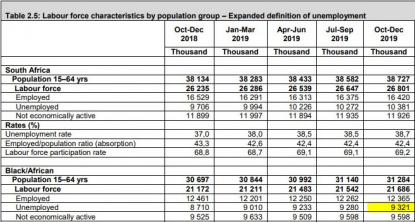 South Africa went into strict lockdown at the end of March 2020 as Covid-19 infections soared for the first time.

AFP reported that nearly a third of the country’s workforce was unemployed in the third quarter of 2020, a 12-year high, as the pandemic took its toll.

By the end of 2020, the country had 10.1 million unemployed black people – higher than the national average but less than half the 20.9 million claimed in the graphic. 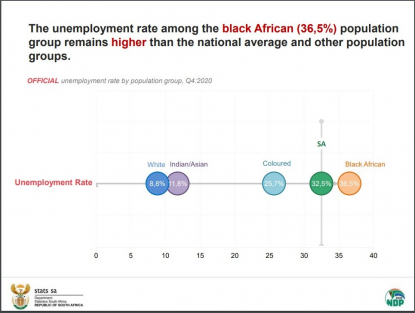 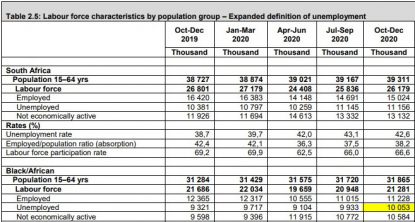 Screenshot showing the number of unemployed black South Africans in 2020

South Africa has one of the highest unemployment rates in the world and available data indicates that the unemployment problem in the country is not a recent phenomenon.

Analysts highlight the legacies of apartheid, poor government policies and sustained poverty as contributors to the high unemployment rates in the country.