This video shows a card game tournament in Saudi Arabia


A video has been viewed tens of thousands of times in social media posts that claim it shows the inauguration of a casino in Saudi Arabia. The claim is false; the video shows a card game tournament in Riyadh, Saudi Arabia, which awarded a cash prize to its winners. Gambling is prohibited in Saudi Arabia and in Islam.

The video was shared on Facebook here on May 25. 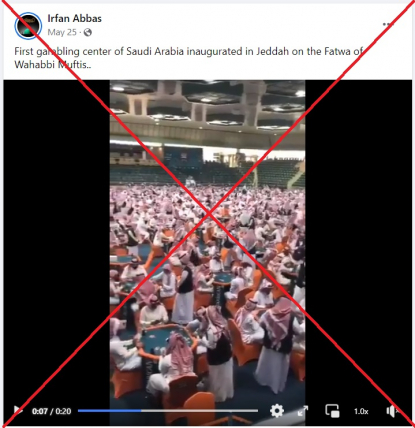 The post's caption reads: "First gambling center of Saudi Arabia inaugurated in Jeddah on the Fatwa of Wahabbi Muftis."

"Fatwa" is a ruling or an edict on a point of Islamic law.

"Wahabi" refers to the puritanical school of Sunni Islam that is predominant in Saudi Arabia, while a "mufti" refers to an Islamic legal authority.

A reverse image search followed by a keyword search on Google found the video uploaded here on Facebook on April 7, 2018, by channel Life in Saudi Arabia.

The caption of the post reads: "Baloot Championship kicks off in Riyadh, Saudi Arabia.…"

“Baloot”, which is similar to the French Belote, is a popular card game among the Gulf youth, particularly the Saudis.

The video also appeared in a report published on April 6, 2018, by The News International, an English-language daily newspaper from Pakistan.

The first Baloot card tournament was held at the King Abdullah Petroleum Studies and Research Center in Riyadh in April 2018, as reported by Saudi Gazette and Arab News, both English-language dailies based in Saudi Arabia.

According to the reports, the total prize money pool for the tournament was over one million Saudi riyals ($270,000).

Below is a screenshot comparison of the video in the misleading post (L) and the video uploaded by Life of Saudi Arabi (R): 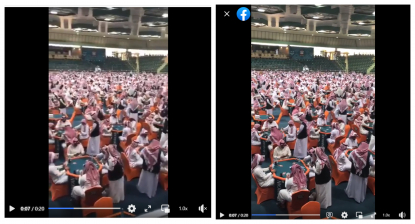 Gambling is prohibited in Saudi Arabia, of which constitution is based on the Koran. The gambling prohibition in the Koran can be read here and here.

AFP has previously debunked a similar claim purporting that another video from a card game tournament was showing a casino in Saudi Arabia.