A photo has been shared on blogs and other social media in Indonesia claiming to show a deadly fire at a Koranic school in Liberia's capital, Monrovia. The claim is false: the image is of a fire at an Islamic boarding school in the Indonesian city of Jayapura.

The photo appeared in this Indonesian-language blog post, dated November 7, 2021.

Its title translates to English as:  "Verily to Allah We Belong and to Allah We Shall Return. Need Your Assistance and Prayers. Fire at Koranic Boarding School Kills 26 Pupils and Two Teachers". 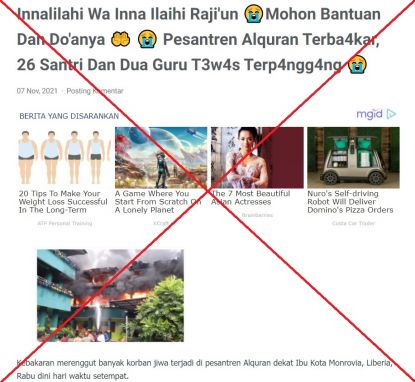 Screenshot of the misleading blog post, taken on November 10, 2021

The first two paragraphs of the blog post reads: "A deadly fire took place at a Koranic boarding school near Monrovia, the capital of Liberia, on early Wednesday.

"As quoted by AFP, the Liberian Presidential Office stated that at least 26 pupils and two teachers were killed in the incident, which started on late Tuesday night and went on until early Wednesday.

It added that Liberian President George Weah, a former AC Milan football player, had visited the disaster location in Paynesville, according to a presidential spokesman.

The photo was also posted in other blog articles here and here alongside a similar claim that it depicts the fire at a Koranic boarding school in Liberia.

The blog articles have circulated on Facebook, for instance here, here, here and here.

A reverse image search on Google found that the photo actually shows a fire at an Islamic boarding school in Jayapura, in Indonesia's Papua province, on February 12, 2019.

The photo was published here in a report in Indonesian news outlet Kompas.com, dated February 13, 2021 and headlined: "Fire at girl's dormitory of Islamic boarding school in Jayapura."

Below is a screenshot comparison between the photo in the misleading post (L) and the Kompas.com photo (R):

Screenshot comparison between the photo in the misleading post (L) and the Kompas.com photo (R)

The photo also appeared in other news reports about the fire at the Islamic boarding school in Jayapura, such as here by state-run news agency Antara and here by local news site PapuaSatu.com.

No deaths were reported in the fire.

The details of the incident described in the misleading posts appear to relate to a fire at a Liberian Koranic school in September 2019, which killed at least 26 pupils and two teachers, as reported by AFP here.