A video has been viewed hundreds of thousands of times in social media posts that claim it shows Americans at a football game insulting US President Joe Biden. However, the video has been doctored to add the sound of chants from a concert, while the footage is from the Copa América Centenario final between Argentina and Chile in 2016. 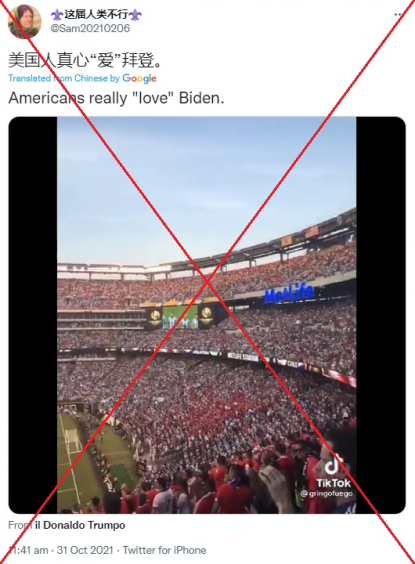 The video was also shared in similar posts here, here and here on Twitter, and on Reddit here.

However, the video has been manipulated.

Keyword searches of the anti-Biden chant in the doctored clip found the same audio in a YouTube video showing a concert by US musician Aaron Lewis on September 25.

The YouTube video was included in a report by Music Mayhem magazine on October 19, headlined: "Aaron Lewis Goes On Anti-Biden Rant During Concert: “Quit Trying To Ruin My F**king Country” [WATCH]".

"The conservative rock star led a "f*** Joe Biden" chant during the group's co-headlining concert with Korn in Scranton, which is the birthplace of the 46th President of the United States, on Saturday, Sept. 25, at The Pavilion at Montage Mountain," Music Mayhem reported.

A closer look at the video reveals signs around the stadium reading "METLIFE STADIUM", "COPA AMERICA", "ARGENTINA" and "CHILE".

Copa América Centenario was a football tournament hosted by the United States in 2016. The final between Argentina and Chile was held at the MetLife stadium in New Jersey on June 26, 2016.

Below are screenshot comparisons between the video shared in misleading posts (L) and the 2016 YouTube video (R): 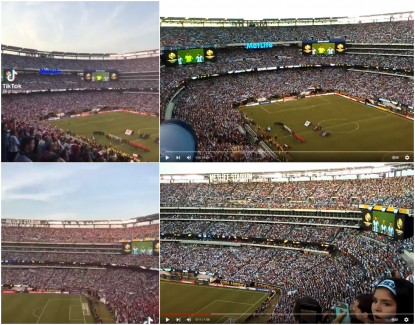 Another keyword search found a full video of the final match, where signs in the stadium visible in the misleading post can be seen from the 15:49 mark.

The same video was also debunked by AP and Reuters.