A  video has been viewed hundreds of thousands of times on Facebook and YouTube alongside a claim it shows crowds celebrating the Prophet Mohammed’s birthday. The claim is false; the video has circulated since at least 2016 in posts about the birthday celebration of Sufi master Ibrahim Niass in Nigeria.

"The largest celebration of Prophet Mohammed’s birthday in Africa. Attended by around 50 million people," the Indonesian-language caption of the post reads.

The footage shows a stadium packed with crowds singing. 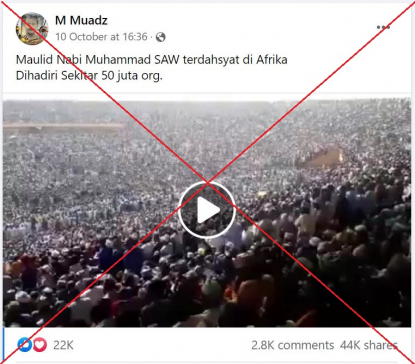 A reverse image search on Yandex followed by keyword searches on Google, found this YouTube video from May 23, 2016, titled: "MAULID OF SHIEKH INYASS (KATSINA 2016)".

Maulid in Islam is the birthday of a holy figure, especially the Prophet Mohammed.

Sheikh Inyass refers to Ibrahim Niass, a Sufi master from Senegal who is reported to have many followers across West Africa. He died in 1975.

Katsina is a state in northern Nigeria.

Below is screenshot comparison between video in the misleading post (L) and the 2016 clip from YouTube (R). 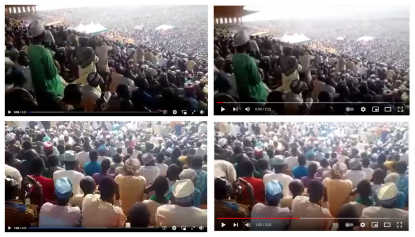 On the other hand, the Prophet Mohammed's birthday fell on December 12 in 2016.

Senegal-based news site Dakaractu also reported on the celebration in an article from May 21, 2016, headlined: "Nigeria: More than 5 million Baye Niass Talibe's take a stadium by storm."

"Baye" is a word in Wolof language, which is spoken in Senegal, and it means "spiritual father or guide".

"Talibe" is a French word used among Senegalese Muslim brotherhoods which means follower.