A video of police officers chanting at a rally has been viewed thousands of times in multiple social media posts in October 2021 that claim it shows them inciting violence against Muslims in the Indian state of Tripura. However, the video has been shared in a misleading context: it has circulated in reports since March 2018 about communal violence in the Indian state of Bihar.

It has been viewed more than 500 times.

The post's caption reads: "This is Tripura police. Leading the rioters to burn Muslims' houses, mosques, and their shops, with their chants."

In the video, the police officers can be heard chanting "Jai Shree Ram".

The phrase -- which translates as "Hail God Ram" -- has become increasingly politicised in India because of religious tensions between Hindus and Muslim minorities.

People standing around the police officers can be seen waving saffron-coloured flags.

Both the chant and the flag are symbols often associated with Hindutva -- an ideology propagated by Hindu-hardliner groups that promotes Hindu nationalism and supremacy in India. 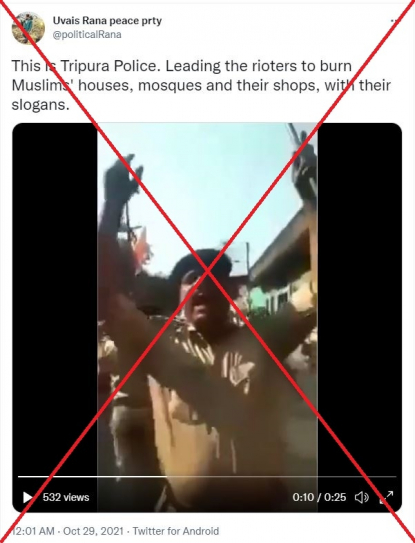 Screenshot of the misleading image, taken on November 2, 2021

The video circulated online after a spate of attacks and protests against Muslim targets by right-wing groups in the northeastern state of Tripura.

At least four mosques were vandalised, while shops and homes owned by Muslims were ransacked on the sidelines of a rally for the right-wing Vishwa Hindu Parishad group, AFP reported.

The attacks were in apparent revenge for deadly violence against Hindus in neighbouring Bangladesh.

The video has been shared alongside a similar claim in English on Twitter here and here.

Comments on the posts suggest people believed the video shows the recent protests in Tripura.

One user commented with the hashtag "#TripuraMuslimsUnderAttack".

Another replied: "We can now see the police belongs to the RSS".

A Google reverse image search followed by a keyword search found the video published on Facebook on March 30, 2018, by PatnaLive -- a local news outlet from India's Bihar state.

The post's Hindi-language caption reads as: "Super Exclusive (video) Seeing this look of a policeman in Ram Navami procession in Rosda, Samastipur, you will be blown away, if you don't believe then watch it".

The report describes how the incident in 2018 took place during Ram Navami -- a Hindu spring-time festival to celebrate the birth of Ram -- in the city of Samastipur, Bihar.

It says that the video was captured amid communal violence at the festival.

The video has also appeared in other social media posts about the communal violence in Bihar since March 2018 -- for example on Facebook here and here and on YouTube here.

Indian news outlets -- including India Today and Navbharat Times -- also reported on the communal violence in Bihar in March 2018.

AFP has previously debunked claims that a graphic video of a man being attacked was taken during the communal unrest in Tripura.