A video has been watched more than one million times in multiple social media posts that claim it shows an motorcade escorting Indonesian President Joko Widodo during his visit to France. The claim is false; the clip shows a motorcade for Queen Elizabeth II when she visited the German capital of Berlin in 2015.

"The 15-strong V-Formation motorcade guards Republic of Indonesia's President, Mr Jokowi, in France. This special guard is only given to a very honoured state guest. Bravo President Jokowi," reads text superimposed on a video clip that was posted to TikTok here on November 2, 2021.

The video has been watched more than 1.2 million times since. 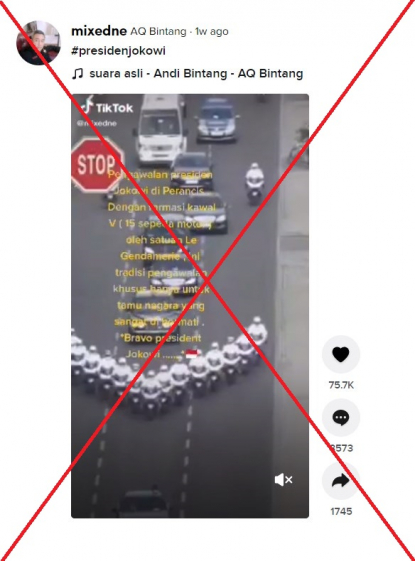 Jokowi is the popular nickname of Indonesian President Joko Widodo.

The video has been viewed more than 231,000 views after it was shared with a similar claim on TikTok here; on YouTube here and here;  and on Twitter here, here and here. 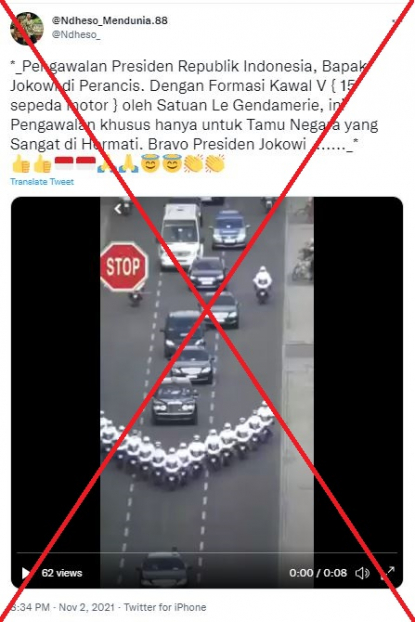 The first few seconds of the video show German text that says: "Queen Elizabeth II on her way to the reception of British ambassador Simon McDonald at his residence."

The clip shared in misleading posts, which shows motorbikes in a V formation, can be found from the 2:06 timestamp.

Simon McDonald served as the British ambassador to Berlin from 2010 to 2015.

The video was taken on the Strasse des 17 Juni, which leads from the Brandenburg Gate and the Victory Column in Berlin.

Queen Elizabeth II visited Germany on June 23-26, 2015, accompanied by her husband Prince Philip, according to the city of Berlin's website.

She attended a garden party hosted by the British ambassador on June 25, 2015.

Below is a screenshot comparison between the video in one of the misleading posts (L) and the genuine YouTube video (R), with matching visuals highlighted by AFP:

This video by Ruptly, a video agency owned by Russian state-controlled televison network RT, shows a similar motorcade which brought Queen Elizabeth to the welcoming ceremony by then German president Joachim Gauck on June 24, 2015.