This photo shows a music festival in Switzerland in 2018

A photo of huge crowds lining the streets is circulating in Facebook posts that claim it shows an anti-vaccine protest in Italy. The claim is false; the photo shows a street music festival in Switzerland in 2018.

Korean-language text next to the photo reads: "Regardless of whether we get the vaccine or not, government stay out of it, Italy says". 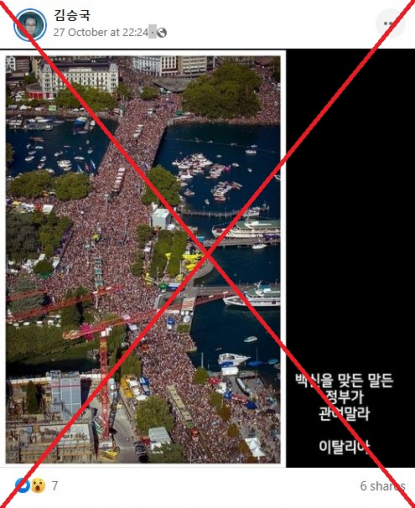 The post circulated online following a series of protests in Italy against the so-called "green pass" for those vaccinated against Covid-19, have recently recovered or obtained a negative test for the disease.

Opposition against the pass -- which some criticise as an attack on individual liberty -- intensified when the government toughened rules on October 15 to make it a requirement to access all workplaces.

The same photo was shared in similar Facebook posts here, here and here.

A reverse image search on Google found the photo was taken in Switzerland, not Italy.

It was published here on the 2018 photo gallery of the Street Parade music festival in the Swiss city Zurich.

Below is a screenshot comparison of the photo in the false posts (L) and the photo on the Street Parade gallery (R). 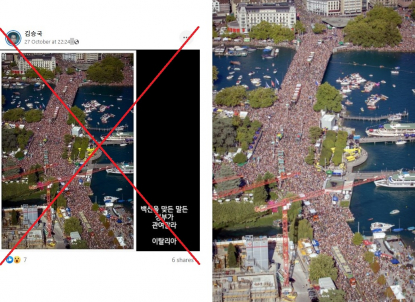 Screenshot comparison of the photo in the false posts (L) and the photo on the Street Parade gallery (R).

The photo corresponds to this bridge in Zurich shown in Google Maps.

Below is a screenshot of the photo (L) and its corresponding features shown in Google Maps (R). 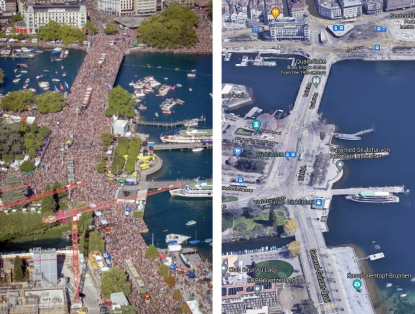 Screenshot of the photo (L) and its corresponding features shown in Google Maps (R).

AFP has previously debunked false posts that misrepresented the photo as a Donald Trump rally in the United States and a demonstration against coronavirus restrictions in Germany.