Skip to main content
This aerial photo taken on October 29, 2021 show smokes and fires from Thantlang, in Chin State, where buildings have been destroyed caused by shelling from Junta military troops, according to local media. ( AFP / STR)

After Myanmar's military reportedly shelled a town after a confrontation with a local self-defence force, Facebook posts shared photos of damaged buildings that they claimed were taken after the purported attack. The claim is false; the photos show buildings destroyed by fighting in Libya.

The post reads: "It's not Syria, It's not Afghanistan, It's Thantlang (Myanmar)" in English and Burmese.

Myanmar troops reportedly shelled the town of Thantlang in western Chin state on October 29 after a confrontation with a local self-defence force, with an ensuing fire destroying dozens of houses, as well as the office of charity Save the Children.

AFP could not independently verify the reports from the remote region.

Myanmar has been in chaos since the military seized power in a coup in February, with "self-defence forces" springing up across the country to take on the junta, escalating attacks and bloody reprisals. 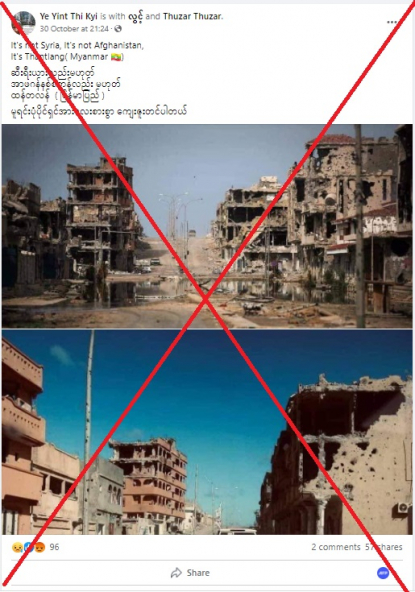 The photos were shared in similar Facebook posts here and here.

A reverse image search on Google found the first photo was published in an article on May 18, 2016 by US media organisation NPR.

The headline reads: "New Report Details The Horrors Of Life Under ISIS In Sirte, Libya".

The photo caption reads: "A view of buildings ravaged by fighting in Sirte, Libya, in 2011. Manu Brabo/AP".

Contacted by AFP, photographer Manu Brabo said that he took the photo in Sirte, Libya in October 2011.

Below is a screenshot comparison between the photo in misleading Facebook posts (left) and the photo published in NPR's article (right):

Rebels killed former leader Moamer Kadhafi in his hometown of Sirte on October 20, 2011, months into the NATO-backed rebellion that ended his four-decade rule.

Another reverse image search on Google found the second photo published in an article on May 25, 2021 on the website of the International Committee of the Red Cross (ICRC).

"When wars are fought in cities, it is civilians who bear the brunt. In this new series, we explore the devastating impact on people who have seen their streets become the frontline," the article reads.

A spokesperson for the ICRC told AFP that the image was taken in the Libyan capital of Tripoli.

Below is a screenshot comparison between the photo in misleading Facebook posts (left) and the photo on the ICRC's website (R):

After a grim, year-long battle for Tripoli, in which rival camps were backed by foreign powers, a truce last summer finally led to a formal UN-mediated ceasefire in October.

That was followed in March by the establishment of a new unity government to replace rival administrations in east and west.