A photo has been shared hundreds of times in Facebook posts that claim it shows a Myanmar military armoured vehicle attacked by anti-coup rebels on November 1, 2021. The claim is false: the photo has circulated in reports about an Israeli tank that flipped over during a training exercise in December 2019.

The image was published here on November 2, 2021 in a Facebook post. It has been shared more than 700 times.

"The armoured vehicle of MAL's army! Slept in a ravine after Tigyaing PDF gave it a taro," reads the Burmese-language caption, using a slang word for "mine bomb".

The military's deadly crackdown on anti-coup protests has pushed some to form a so-called "People's Defence Force" (PDF) in their own townships -- made up of civilians who fight back against security forces with homemade weapons.

The Facebook post's caption continues: "At 11:30 pm on 1.11.2021, Tigyaing PDF attacked MAL's armoured vehicle with mine in Mawkun Mountain, Tigyaing Township, Sagaing. Apparently, the armoured vehicle hit a mine and fell down the mountain."

Tigyaing is a town in Myanmar's Sagaing region. 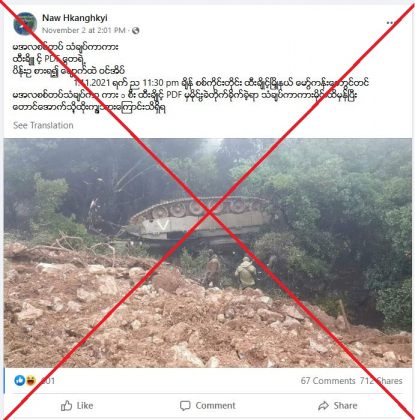 A screenshot of the misleading post, taken on November 4, 2021

The photo -- which was shared alongside a similar claim in Facebook posts here, here and here -- circulated online after local media reported that local PDF attacked Myanmar army vehicles in Tigyaing on November 1.

AFP has not been able to independently verify the reports.

A reverse image search on Google found the photo in a news report about an Israeli tank that flipped over during training in December 9, 2019 -- more than one year before the military coup in Myanmar.

"The head of the IDF Northern Command on Monday ordered a halt to all exercises, following a training accident earlier in the day in which a tank flipped over," The Times of Israel reported.

"There were no injuries in the accident, in which a Merkava tank turned over, falling into a heavily wooded ditch, during a rainy, foggy training session in northern Israel." 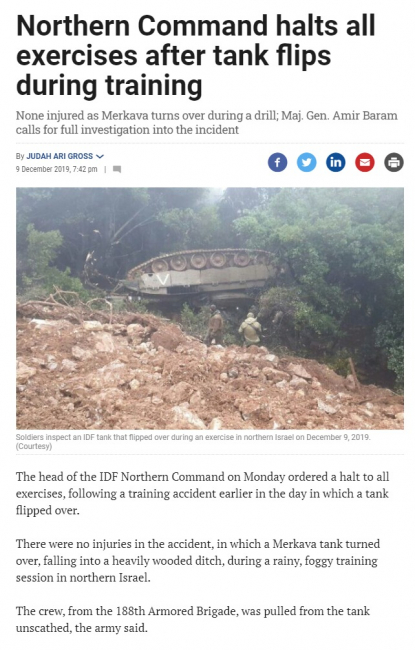 A screenshot of the Times of Israel's report, taken on November 4, 2021

The same image was also shared here in a report on December 9, 2019, about the same incident by Israel Hayom, an Israeli national Hebrew-language newspaper.