Canada's Trudeau did not wear kilt to COP26 summit in Glasgow

A Facebook post claims that Canadian Prime Minister Justin Trudeau wore a kilt at the 2021 COP26 climate summit in Glasgow, Scotland. This is false; images of Trudeau at the summit show him in a suit, and the photo used to illustrate the post was taken in Canada in August 2015, before the Liberal Party leader won the premiership.

"ANNNNNNNNDDDD Mr Dressup is at it again. Walking the streets of Glasgow. How many other 'so called' world leaders would embarrass their citizens like our prime eejit does?" says an October 29, 2021 Facebook post featuring a picture of Trudeau in the traditional Scottish garment. 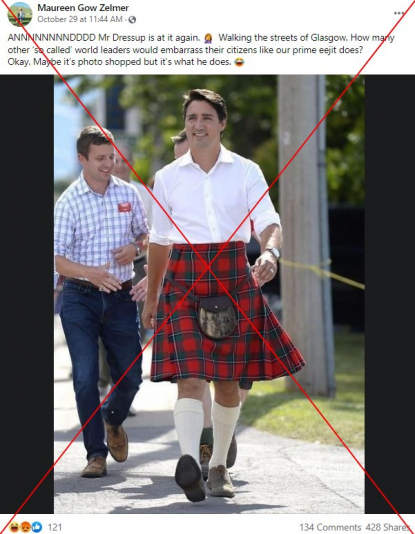 The post plays on Trudeau's controversial history of wearing costumes. He was criticized for wearing traditional outfits while visiting India in 2018, and it was revealed in 2019 that he had worn "blackface" at parties decades earlier.

But the photo used in the post is not from Glasgow in November 2021, where world leaders including Trudeau gathered in the Scottish city for COP26, a major climate summit. 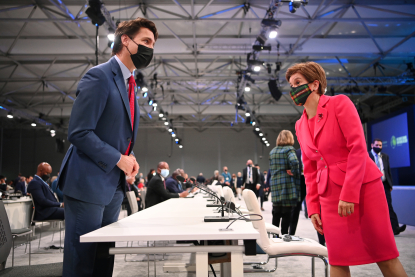 To find the photo in the post, AFP conducted a Google search for "Trudeau kilt." This led to articles about the PM's 2017 visit to the Glengarry Highland Games, a Scottish-themed competition in Maxville, Ontario.

Trudeau, who has Scottish ancestry, came dressed in a kilt and told reporters: "This is my Sinclair tartan. I'm proud to wear my grandfather James' tartan."

Some of the articles used pictures credited to The Canadian Press, Canada's national news agency. Searching The Canadian Press' image bank for the terms "Trudeau" and "Maxville" reveals that the original photo was taken at the Glengarry Highland Games on August 1, 2015, when the Liberal leader was not yet prime minister. He came to office later that year.

AFP Fact Check has also debunked posts that used an image of Trudeau in a Halloween costume to claim the premier converted to Islam.