A Facebook post claiming that a wealthy 73-year-old American woman died three days after marrying a much younger Kenyan man, leaving him with her fortune, has been shared in Africa alongside images of the purported couple. This is false; the pictures are unrelated to the claim and actually show an American TikTok power couple with a distinct but different age gap. The woman, who is 61, is still alive.

On September 14, 2021, this Kenyan Facebook page with more than 30,000 followers published two pictures of an older woman beside a younger man, with one of the images appearing to show their wedding.

“A 73-year-old woman dies during honeymoon three days after the wedding, leaving behind a multi-billion business empire to Kenyan husband. Mrs Julia Donson Wachira, the 73-year-old American woman who made headlines after marrying a 34-year-old Kenyan doctor, is no more,” reads the post. 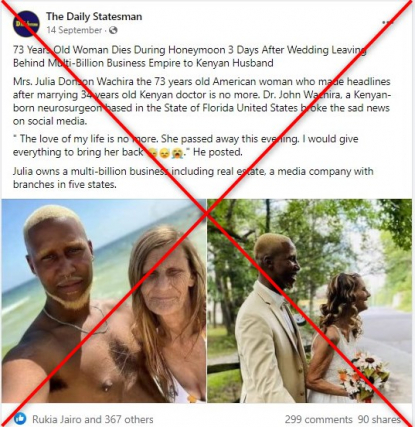 Similar Facebook posts were shared in Zambia (here) and Nigeria (here and here). Screenshots of the same post were published in news articles here and here.

A Google search for the names “Mrs Julia Donson Wachira” and “Kenyan doctor John Wachira” only revealed results related to the posts in question. There was no other evidence to determine whether the names in the claim belong to real or fictional people.

However, the pictures used in the posts are unrelated to the claim and can be found here.

A reverse image search reveals multiple news articles (see here, here and here) identifying the woman as Cheryl McGregor, 61, and the man as Quran McCain, 24. According to reports, the American couple with a 37-year age difference tied the knot in September during a live-streamed ceremony on TikTok.

A further TikTok search located their accounts (see here and here) with more than 1.3 million followers in total.  McGregor and McCain have posted numerous videos together, the latest being on October 25, 2021 (see here and here) -- more than a month after their photos were first used in the false Facebook post.