A video has circulated in social media posts that claim it shows a man fainting in front of Britain's Prince Charles after receiving a Covid-19 vaccine. The claim is misleading; the video shows a supermarket employee who passed out while speaking to the royal in July 2020, five months before Britain started its Covid-19 vaccination drive. The man recovered soon after the incident, local media reported.

"Prince Charles talks to a Vaxxed man who then collapses outside the Vaxx Bus ASDA," reads a tweet from October 24, 2021.

The video shows Charles speaking to a man, who suddenly stumbles backwards and falls to the ground.

Text at the end of the video reads: "It's not a vaccine. It's a bioweapon. #RESIST". 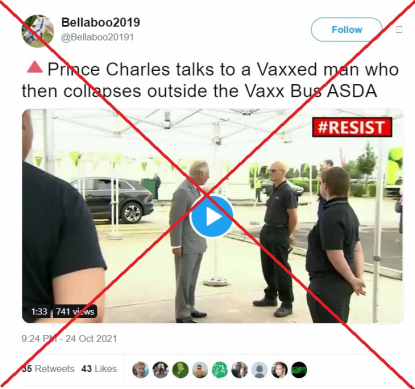 The video was shared alongside a similar claim on Facebook here and here, and on Twitter here.

A Google reverse image search of a screengrab of the video found this article from July 10, 2020 by British online newspaper The Independent.

"The employee received medical attention immediately and recovered quickly, with colleagues reassuring the Prince. It is not known why the man fainted," it reported.

The video shared in misleading posts was originally published by The Telegraph newspaper on July 10, 2020.

Charles and his wife Camilla were visiting a distribution centre for supermarket Asda in the English city of Bristol to thank key workers for their role during the pandemic, UK tabloid Metro reported.

A spokesman for Asda said the man -- whom the company did not name -- fainted when the "magnitude" of meeting the prince became "a little much".

"The magnitude of the moment was a little much for one of our colleagues, who briefly fainted, but after taking a few minutes to recover himself he returned to continue his tour and reassure everyone he was absolutely fine," he told AFP.

The Pfizer/BioNTech Covid-19 vaccine was approved in Britain on December 2, 2020, five months after the incident.

On December 8, 2020, the first Pfizer/BioNTech jab was given to 90-year-old Margaret Keenan, who was also the first person in the Western world to receive an approved coronavirus vaccine.

While human trials of coronavirus vaccines started in Britain in April 2020, Asda's spokesman said it believed it was "highly unlikely" the man in the video was a participant, although the company could not confirm this as it does not have access to employees' personal medical information.