Adult-themed slide is a prop from a Canadian film, not from playground in Germany

An image of a playground slide shaped like human genitals has circulated on social media in Nigeria and elsewhere with claims that it was taken at a children’s play park in Dresden, Germany. However, this is false: the equipment was used as a movie prop in Canada and removed after filming. Dresden officials also denied putting up the adult-themed slide.

The image was shared by dozens of social media users in Germany who thought the slide had been set up by authorities in the German city of Dresden.

“Children’s playground in Dresden, Gompitzer Höhe! ... what the hell is going on in the minds of those who approve something like this? What else do you expect from a red-red-green city council?” reads the English translation of one of the posts on Facebook.

The term “red-red-green” is regularly used in German politics to describe the coalition between the Social Democratic Party of Germany, the Left Party and the Greens.

The image is now being circulated in other parts of Europe. In France, hundreds of Twitter users alleged the picture of the slide was taken in Paris, while the claim also made its way to Nigeria. 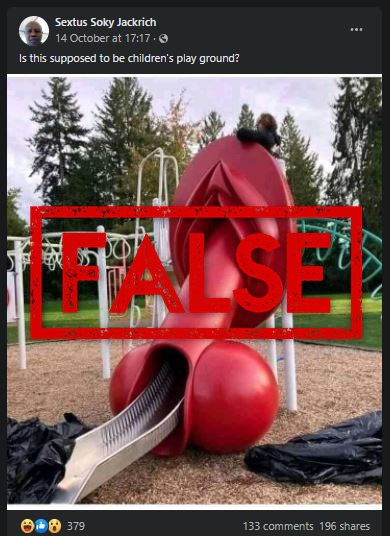 However, AFP Fact Check found the playground equipment in the image was used on a movie set in Canada and taken down after filming.

A reverse image search led to a tweet featuring three images, including the one showing the red slide.

“They are filming a @Sethrogen in Maple Ridge and they have made some temporary changes to one of the local parks,” reads the tweet published on October 7, 2021.

In the comment section, the author specifically says the photos were taken at Fletcher Park, located in the Canadian city of Maple Ridge in the southwest part of British Columbia.

Using Google Maps Street View, AFP Fact Check found that items like the curb and a white-green climbing frame in the shared image match those from a playground in Fletcher Park.

Authorities in Maple Ridge confirmed that the image was indeed taken on a movie set and the slide was removed after production was completed.

“It was a [closed set] so that the public was not affected,” city spokesman Fred Armstrong told AFP Fact Check on October 12, 2021. “The production was on site for a few days and removed all props after filming was completed.”

Canadian media reported on the film set that went up in early October.

Canadian website Daily Hive wrote about “the obscene production set” while Hollywood North Buzz said the makeover of the playground was part of a set for a comedy movie by "Crazy Rich Asians" screenwriter Adele Lim and producer Seth Rogen.

German officials in Dresden also dismissed claims the image originates from a children’s playground in the German city.

“I can assure you that this slide is not in Dresden and that there is no such or similar play equipment in Dresden either,” spokeswoman Anke Hoffmann told AFP Fact Check.