Skip to main content
Afghans (L) crowd at the airport as US soldiers stand guard in Kabul on August 16, 2021. ( AFP / Shakib Rahmani)

Video does not show '40,000 US veterans' discarding medals in solidarity with Iraq, Afghanistan

The footage shows people in military uniform speaking to a crowd before hurling their medals into the distance.

"I'm here to return my Global War on Terrorism Service Medal in solidarity with the people of Iraq and the people of Afghanistan. I am deeply sorry for the destruction we have caused in those countries and around the globe," one man says.

"No amount of medals, ribbons or flags can cover the amount of human suffering caused by these wars. We don't want this garbage," says another veteran. 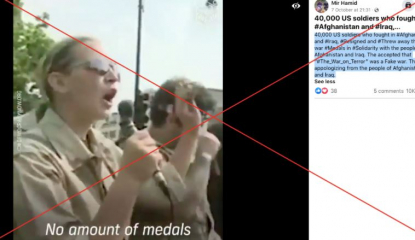 Screenshot of the false claim shared on Facebook, taken on October 27, 2021

US forces pulled out of Afghanistan in August, ending a two-decade occupation triggered after the September 11, 2001 attacks.

In Iraq, the 2003 US invasion to oust dictator Saddam Hussein ended after eight years, before troops returned in 2014 to head a coalition battling jihadists. President Joe Biden said in July that US combat operations in the country would end this year.

The video was shared in similar Facebook posts here and here.

A reverse image search on Google found a longer version of the video posted on YouTube by US programme "Democracy Now!" on May 21, 2012. The video is titled, "No NATO, No War": U.S. Veterans of Iraq and Afghanistan Return War Medals at NATO Summit".

The video shared in misleading posts starts at the 05:11 mark.

According to the video caption, "nearly 50 veterans" tossed their medals, not 40,000 as misleading posts claim.

"On Sunday, veterans of the Iraq and Afghanistan wars, as well as members of Afghans For Peace, led a peace march of thousands of people. Iraq Veterans Against the War held a ceremony where nearly 50 veterans discarded their war medals by hurling them down the street in the direction of the NATO summit," the video caption reads.

AFP reported on the "group of veterans who spoke passionately about their opposition to the war before tossing their medals into the street".

The event was held at an anti-war protest in Chicago, where North Atlantic Treaty Organization (NATO) leaders met for a summit focused on Afghanistan.

Officials said an estimated 3,000 to 5,000 people marched in the city, but later some protesters clashed with riot police after ignoring orders to clear the streets.