An artist created these images using fireworks and Photoshop, not fireflies

Facebook posts shared thousands of times purport to show photos of "fireflies photographed in trees". The claim is false; the artist behind the images, Vitor Schietti, said the images were entirely created using fireworks and Photoshop.

The images in the post appear to show trees with fountains of sparks cascading off their branches. 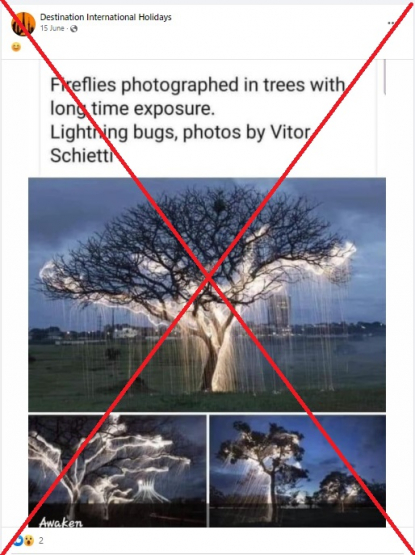 Similar posts have been shared thousands of times from Facebook users around the world, including in Pakistan, Sri Lanka and the United States.

Barcelona-based artist Vitor Schietti said he made the images for his Impermanent Sculptures series using fireworks and Photoshop, not fireflies.

"They are entirely produced using fireworks and long exposure photography with overlaying images on Photoshop," he told AFP.

Schietti posted a video of himself using fireworks on a pole and Photoshop to create images similar to those featured in the Facebook posts.

Making of Impermanent Sculptures 2021.mov from Vitor Schietti on Vimeo.

He said he developed the unique process while creating a course on long-exposure photography.

"Conceptually, what moves me is to remind people of the interconnection of all living things, of energy forces that are not seen by the naked eye but that are very much present in our world".

The artist has given multiple interviews on the project (see here, here and here) where he explains the images in more detail.