Although age restrictions loom, people younger than 18 can still get SIM cards in Nigeria

News articles in Nigeria claim that the Nigerian Communications Commission (NCC) has banned the sale of SIM cards to children younger than 18. This is misleading: the NCC is indeed considering the move, as reflected in one of its draft regulations, but the policy is yet to come into effect. An NCC spokesperson confirmed this to AFP Fact Check.

A number of news articles in Nigeria, including this one, were published with the headline “NCC bans Nigerians below 18 years from obtaining SIM cards,” giving the impression that an effective ban has already been applied to minors owning mobile SIM cards.

Similar reports were carried by other news outlets here and here, claiming that “the Nigerian Communications Commission (NCC) has banned anyone below the age of 18 from registering and owning a SIM in Nigeria.”

The post by YabaLeftOnline cites a draft copy of the “modified Registration of Telephone Subscribers Regulations”. 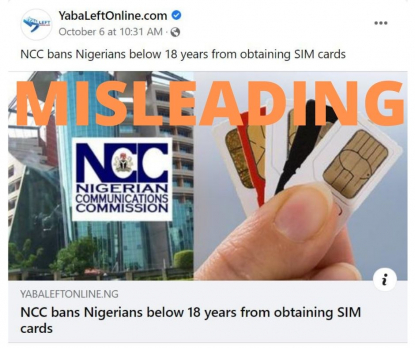 A screenshot taken on October 21, 2021, showing the misleading post

NCC has been tweaking its telecommunications policies to combat security threats in Nigeria. In 2015, Africa's biggest wireless operator MTN was sanctioned after failing to disconnect 5.1 million subscribers in Nigeria.

Recently, there has been rising unrest and terrorist activities in Nigeria. The country recorded the abduction of about 1,000 school children over a seven-month period from December 2020, mostly in the northwest region. To cut off criminal gangs, Nigeria enforced a strict SIM registration process, forbidding the sale of SIM cards for four months.

After the sale restriction was lifted, the NCC shut down telecommunications in Zamfara state and part of Kaduna state – both in the northwest – for security reasons.

No ban on minors

The NCC is indeed considering the exclusion of minors from registering and buying a SIM card in Nigeria. In the draft copy of “Registration of Telephone Subscribers Regulation,” uploaded to its website, the commission said a “subscriber means a person not below the age of eighteen (18) years who subscribes to mobile telecommunication services by purchasing a subscription medium or entering into a subscription contract with a licensee”.

However, this restriction remains under discussion and is not yet part of the new laws. A public hearing over the draft amendments reported in the local media (here and here) showed that stakeholders in the industry oppose the imposition of an age limit.

NCC spokesperson Ikechukwu Adinde also denied the reports of a ban, calling them “not only misleading and inaccurate; but a misinformation and mischaracterisation of the proceedings of the Public Inquiry on the Reviewed/Draft Registration of Telephone Subscribers Regulations, which took place on Tuesday, October 6, 2021”.

He added: “The consultative engagement process is still ongoing, as the commission is reviewing all input from relevant stakeholders in this regard and will consider and deliberate on all comments before issuing a final regulatory instrument.”

The proposal, which lists national security as a consideration, notes that parents and guardians can acquire SIM cards in their names on behalf of their children and wards, and assume whatever responsibilities or liabilities that arise from their use.