A video of an Indian politician collapsing while giving a speech at a rally has been viewed thousands of times in Facebook and Twitter posts alongside a claim that he died on stage. The claim is false; the video shows Vijay Rupani, then chief minister of the Indian state of Gujarat, fainted while giving a speech in February 2021 but survived the dizzy spell.

The one-minute, 24-second video was published here on Facebook on March 2, 2021.

It shows Indian politician Vijay Rupani, who served as chief minister of Gujarat state until he resigned in September 2021, collapsing on stage while giving a speech.

The post's Indonesian-language caption reads: "The prime minister of Gujarat (India) can spit out poison to fight Islam...but unfortunately Allah took his life right on stage, the enemies of Islam one by one will be annihilated by Allah. Alhamdulillah."

"Alhamdulillah" is an Arabic phrase meaning "praise be to Allah". 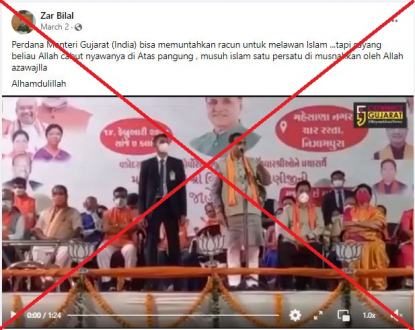 Rupani, a senior politician from the ruling Bharatiya Janata Party, is infamous for making Islamophobic remarks and policies.

The video has been viewed more than 850 times after it also circulated in Facebook posts with similar claims in October 2021, for example here, here and here; and on Twitter here and here.

A reverse image search, followed by a keyword search, found a longer video was posted here on the YouTube channel of local news outlet Connect Gujarat TV on February 14, 2021.

The video is titled, "The chief minister feels dizzy at the Vadodara election rally, he falls down while addressing the rally".

The clip in the misleading post is taken from the 1:00 mark of the original video.

Below is a screenshot comparison of stills captured from the video in the misleading post (left) and the YouTube video (right): 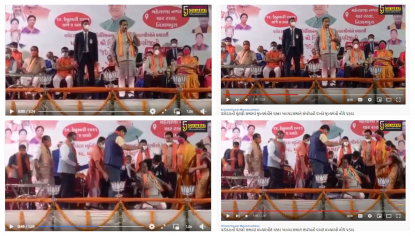 Hindustan Times, an Indian daily newspaper, reported that Rupani fainted on stage while giving a speech at a rally in the city of Vadodara, in Gujarat, on February 14, 2021.

According to the report, he was given first aid treatment after he collapsed and then flown to the state's capital, Ahmedabad, for a medical check-up.

The event was also broadcast live from Rupani's official Twitter account: at 14:54 mark, the chief minister can be seen feeling unwell.

Rupani tweeted on February 15, 2021, that he had tested positive for Covid-19 and was undergoing treatment.

As of October 25, 2021, Rupani was still active on social media, posting photos of his activities in London on his official Facebook and Instagram accounts.