Two photos featuring modified Australian military vehicles with Red Cross and UN symbols travelling through an outback New South Wales town have been shared by Facebook users alongside a claim they signal a coming “civil war”. The images have been shared in a misleading context: an Australian Defence Force spokesperson said the vehicles shown in the images would be donated to support Indonesia’s UN peacekeeping missions.

Two photos were shared on Facebook by an Australian-based user here on October 8, 2021.

The post's caption reads: "WEST NARRABRI NSW: Hmmmm civil war will break out, let the push back begin and the Glory of God cover the earth. #holdtheline. Get ready Australia." 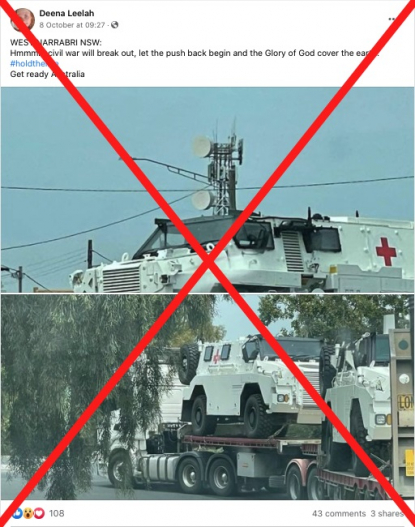 Narrabri is an outback town in Australia’s most populous state, New South Wales.

Various photos of the Bushmasters bearing the Red Cross and the UN symbols being transported were also been shared on Facebook here and here.

This Facebook post included a video of a truck transporting the Bushmasters alongside a caption that reads: "U.N Vehicles in NSW - Australia - near Narrabri 7th October 2021".

The images were captured here in Narrabri.

An ADF spokesperson told AFP the photos show Bushmasters -- mobilised to support Indonesia’s peacekeeping operations -- being transported to a testing facility near the Victorian town of Monegeetta.

The Australian defense department has used the facility since the 1940s for testing military vehicles and equipment.

“As announced earlier this year, Australia will gift 15 Bushmaster vehicles to support Indonesia’s peacekeeping capabilities, along with training on the operation and maintenance of the vehicles,"  the ADF spokesperson said.

“The vehicles pictured were being transferred to Army Testing Site – Monegeetta as part of this arrangement."

The arrangement was announced in this joint statement on September 10, 2021, by the Australian ministers for defence and foreign affairs and their Indonesian counterparts.

This statement from Australian Defence Minister Peter Dutton said the 15 Bushmaster vehicles would be used in a variety of missions to support Indonesia.

"These four-wheel drives carry up to nine infantry officers. They provide protection from explosive devices and from small arms fire," he said in the September 9 statement.

According to the UN, Indonesia has participated in nine UN peacekeeping missions around the world.