“The World Would Surely Miss U #RIP Archbishop Desmond Tutu #90yrs,” reads a post published on Facebook in Nigeria on October 20, 2021. 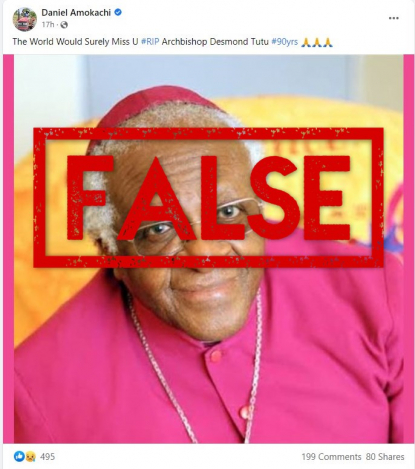 The post, which has since been shared 80 times, was published by former Everton and Nigeria football star Daniel Amokachi, who also had a stint working as the Super Eagles assistant coach.

Amokachi, who won the African Cup of Nations and Olympic gold during his time as a player for the men’s national team, was appointed Nigeria’s football ambassador by President Muhammadu Buhari in 2020.

Many people commenting on Amokachi’s post shared their condolences. 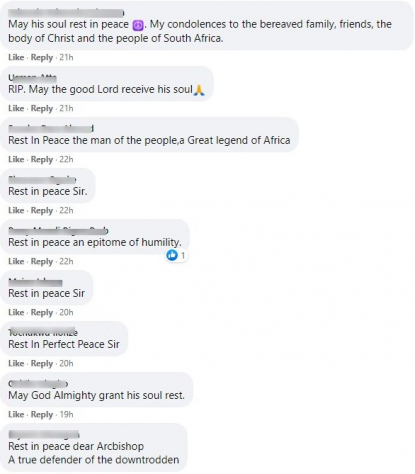 The account, since deactivated, was created in August 2021 under the name of  Anglican Archbishop Stephen Moreo from Johannesburg, South Africa. 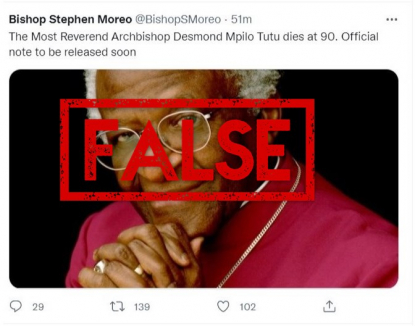 AFP Fact Check reviewed the account before it was deactivated. It only had three tweets but nearly 15,000 followers. The comment section showed that people believed the rumour, with users sharing condolences. 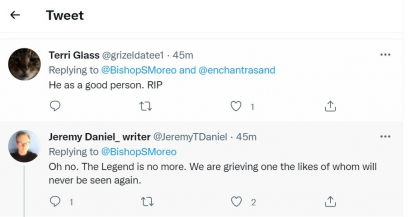 Screenshot of comments under the false tweet, taken October 21, 2021

Tutu turned 90 on October 7, 2021, and attended a special thanksgiving service at St George's Cathedral in Cape Town, the same church where he was appointed South Africa's first black Anglican archbishop.

The Desmond & Leah Tutu Legacy Foundation, the Anglican Diocese of Johannesburg and Moreo all denounced the claim.

The Desmond & Leah Tutu Legacy Foundation, through a statement posted on its official website, confirmed that Tutu is alive.

“The Desmond & Leah Tutu Legacy Foundation outrightly condemns the false, irresponsible, mischievous news that has been circulated today about our Founder Archbishop Emeritus Desmond Tutu. Archbishop Emeritus Desmond Tutu is firmly with us, the Desmond & Leah Tutu Legacy Foundation has announced categorically,” reads the statement from the organisation.

The Anglican Church of South Africa, where Moreo works, also sent a statement to AFP condemning the rumour.

“As said in the statement released by the Anglican Church of South Africa, I did not make the unfortunate claim. I am also not associated with the social media account that published the information,” said Moreo.