Online articles and social media posts in Canada and the US shared a photo of a purported leaked email notifying Canadian civil servants that they would face immediate termination if they use the phrase "Let's Go Brandon" -- a slogan recently popularized to mock US President Joe Biden -- in professional emails. This is false; the memo is fake and both the government agency mentioned in the document and the union representing its employees say no such policy had recently been enacted.

"This is a formal notification that all government correspondence must be professional in nature and approved by department heads," says an email that appears to be from Shared Services Canada, shared as a photo on Twitter and Facebook by social media users on both sides of the border.

"Specifically, the use of the wording 'Let's Go Brandon' and any variation thereof under any circumstance is banned by the Canadian Public Service," the memo, dated October 14, 2021, continues. 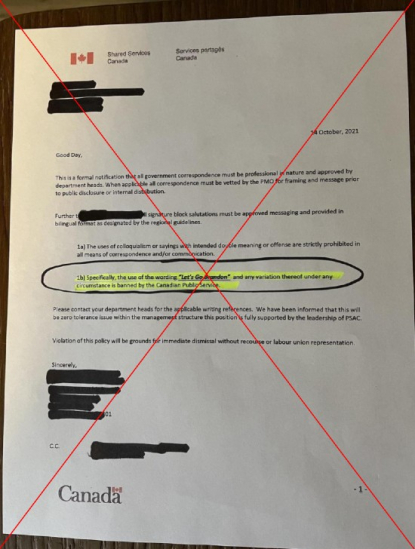 The email refers to an anti-Biden slogan, which began after a NASCAR journalist live television interview with the driver; the journalist stated the crowd was chanting "Let's Go Brandon" even though they were  shouting "Fuck Joe Biden" while she interviewed NASCAR driver Brandon Brown. Brown had just won his first race at Alabama's Talladega Superspeedway on October 9.

Following the interview, "Let's Go Brandon" quickly spread across the internet, used as a hashtag or in memes mocking the US president.

A Government of Canada logo is visible at the bottom of the alleged document featured in the posts, making it seem like a leaked email from the agency responsible for providing information technology to federal departments.

Online media such as Canada's Post Millennial, which has since updated its article, and the US-based Daily Wire, which AFP has fact-checked in the past, also published the photo of the email.

The posts claimed that the new policy is "fully supported by the leadership of PSAC," the Public Service Alliance of Canada, a union representing the agency's employees.

A spokesperson for PSAC said that its leadership "did not sign off on this letter and cannot confirm its validity. All union members have a right to representation."

Other details suggest that the email is fake, including missing punctuation in the second-to-last paragraph, and the placement of the Government of Canada logo -- usually featured at the top of official communications or directly below the sender's email signature.

Additional posts claimed that Canadian Prime Minister Justin Trudeau did not like the chant, and was responsible for the ban. Contacted by AFP, the prime minister's office referred to Shared Services Canada's statement.

Some media reported that the image originated on a Virginia-based Twitter account, but AFP determined that the likely origin of the hoax was an October 15 post in the closed Facebook group "Justin Trudeau's Dank Meme Stash."