A video of security guards frogmarching a Black man has been shared thousands of times on Facebook in Nigeria alongside a claim that it shows the governor of Nevada state being manhandled because he is an African-American unknown to the police. However, the man in the clip is Republican politician Mack Miller, who is vying for the office of lieutenant governor in Nevada, but is not the incumbent governor. Another video of the same events shows Miller was not the only one ejected from the meeting where local officials passed a resolution declaring Covid-19 misinformation a public health crisis.

“The Governor of Nevada USA, an African-American going to a meeting was not recognized by security and was treated like a real black and they nearly killed him,” reads the caption of the video, which has been viewed more than 71,000 times since it was published on October 5, 2021. 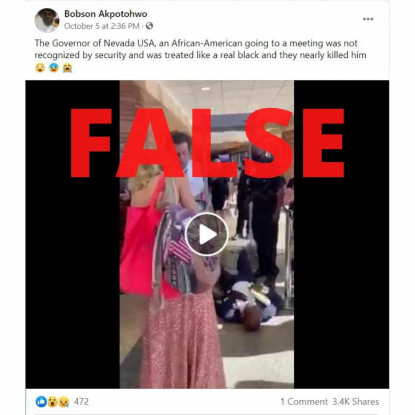 A screenshot taken on October 15, 2021, showing the false post

The man, dressed in a suit and clutching papers, is seen being escorted along a passage by guards in uniform before he is thrust through a security checkpoint and falls to the ground.

The claim that the man in question is Nevada’s governor, however, is false, while separate footage preceding the incident also provides extra context.

A Google keyword search revealed that Steve Sisolak is the state’s incumbent governor. Nevada has never had an African-American at its helm, based on the National Governors Association list of former governors. 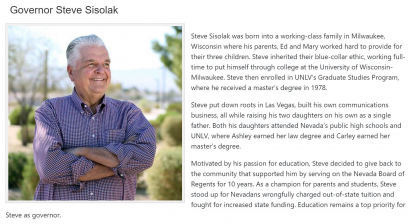 Miller told Fox News’ “The Ingraham Angle” show that he was attending a meeting in Clark County as part of a free-speech protest when the incident happened.

Clark County commissioners were meeting to declare Covid-19 misinformation and disinformation a public health crisis. The county is responsible for more than 80 percent of new Covid-19 cases recorded in Nevada. Miller and others attended the hearing to oppose the motion.

According to 3 News, a Clark County spokesperson said a group of attendees became disruptive after one of them was asked by security officers to put on his face mask after “numerous persons became boisterous [and] it became necessary to clear the room”.

The Nigerian Facebook post claims that Miller was targeted because of his race. However, another video of the same incident shows that he was one of a number of protesters, including white people, being escorted out of the building. 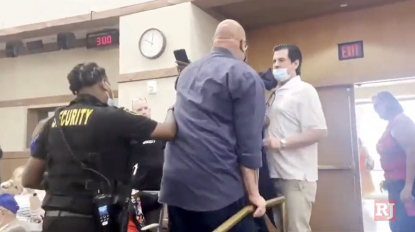 A screenshot of a video taken inside the meeting hall, showing some other people, alongside Miller, being asked to leave the building

As security guards shove Miller through the checkpoint and he falls to the ground, a woman is also seen being ejected and told to leave the building. She refuses, saying: “I’m his friend and I don’t trust you guys.”