Nursing homes and orphanages not combined in Canada

Social media posts claim that a project in Canada saw exceptional success when it combined nursing homes and orphanages. This is false; no such project exists in Canada, according to the federal government and an expert, and the photo used to illustrate the posts is unrelated.

"Brilliant idea being implemented in Canada. They combined nursing homes with the orphanages. The result exceeded all expectations! Elders found grandchildren, orphans experienced the love and care for their parents for the first time. The elderly have improved significantly in their health and their will to live," claims an October 7, 2021 Facebook post. 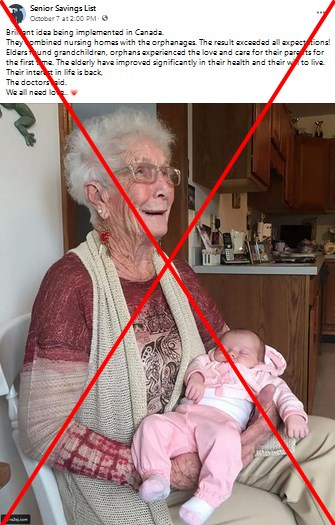 But these claims are false. A spokesperson for Health Canada and Public Health Agency of Canada called the story "misinformation."

"There are no combined nursing homes and orphanages in Canada," the spokesperson told AFP in an email.

John Hirdes, professor at the School of Public Health Sciences at the University of Waterloo, also confirmed that "this is absolutely a fabricated story."

"Certainly there are initiatives to support inter-generational interaction between older persons and kids/youth, but nothing of this type," he said pointing to programs including a Toronto senior home sharing a roof with a daycare and intergenerational living for university students and elders.

He said research shows the benefits of such interactions, but nothing suggests that the success of story about the combination of nursing homes and orphanages told in the posts is true.

Hirdes also said that there are no orphanages currently in Canada.

"All of our child care services have moved to a foster-family and group home based approach with the aim of quickly having children in need connected with caring families," he said.

Photos out of context

A reverse image search using Google revealed that the photo in the posts was shared in January 2017 by a Reddit user with the title: "My two-week-old niece met her great-great-grandmother today." 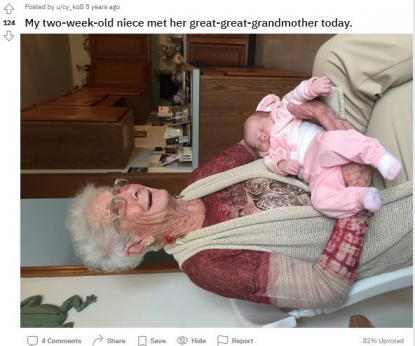 Contacted by direct message on Reddit, the user confirmed that the photo was "taken in Milford, Delaware in January 2017."

She said: "That is my great-grandmother along with my niece, not an orphan from Canada. Definitely made me uncomfortable seeing it in that context."

Other posts use a different set of images to claim: "In Canada, they put together a 'nursing home' and an 'orphanage'." 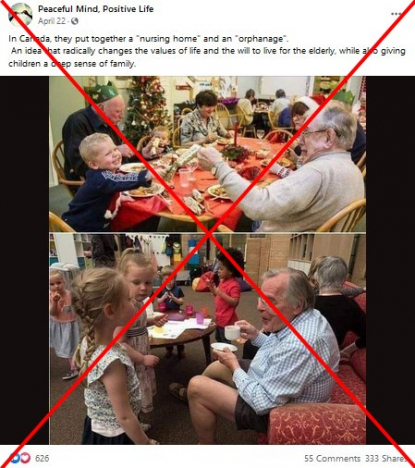 In the pictures, older people are seen chatting and laughing with children. But these photos are not from Canada, as AFP first explained in French, here.

A reverse image search of the top photo shows that it appeared in an online article written in 2017 by British academic Catrin Hedd Jones. The caption indicates that the facility is in Wales.

Screenshot taken on December 3, 2021 of an article from The Conversation

The scene took place during the filming of a documentary for a local broadcaster. It showed six children who spent three days with elderly people in a nursing home.

A reverse image search of the second image also leads to news articles from 2017. 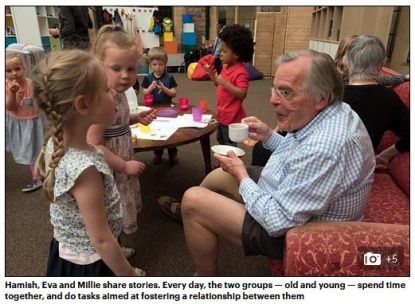 Screenshot taken on December 3, 2021 of a Daily Mail article

This scene comes from the British broadcaster Channel 4's documentary program "Old People's Home for 4 Year Olds." It filmed a nursery group sharing a classroom with 11 pensioners in Bristol, England.

Both experiments aimed to show the positive effects of intergenerational interaction, but they took place in the United Kingdom.