Experts say showering at night does not cause rheumatic diseases

Posts circulating on TikTok and Twitter claim that taking a shower at night will cause rheumatic illness. The claim is misleading. Experts told AFP that showering at night would not cause a rheumatic condition, but advised those suffering from one to avoid showering in the evening as it may worsen their symptoms.

"The pain is truly unbearable, be careful not to take a night shower often," reads this Indonesian-language post on TikTok, dated December 31, 2020.

"I am now suffering from a rheumatic illness: gout in my feet," the post adds.

The video has garnered more than 1,400 views. 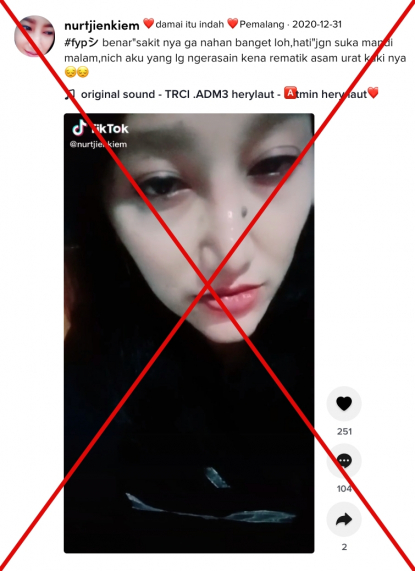 Rheumatic diseases — which include gout and arthritis — may cause pain in the muscles, bones, joints and other parts of the body, according to Johns Hopkins Medicine.

A similar claim that night showering can cause rheumatic illnesses also appeared in this TikTok post, which has been viewed more than 1,200 times.

The claim was also posted on Twitter here, here, here and here.

Dr Andi Raga Ginting, a rheumatologist at H. Adam Malik General Hospital and Royal Prima Hospital in the Indonesian city of Medan and a lecturer in internal medicine at the University of North Sumatra, said the claim was "100% a myth".

"There are no research studies that support or prove this," he told AFP on October 9, 2021.

"Taking a shower at night will not cause rheumatic illness. But a night shower, especially using cold water, for someone who already has a rheumatic disease, or problems with the joints, will cause pain," he added.

Dr Andi explained that the combination of cooler temperatures at night and cold water would lead to joint capsules shrinking, causing pressure on the joints and discomfort.

The claim that night showers cause a rheumatic disease is "not true", said Dr Eka Mulyana, an orthopaedics and traumatology specialist at Subang Regional General Hospital, in the Indonesian province of West Java, and the head of the Indonesian Medical Association's West Java chapter.

Dr Eka echoed Dr Andi's assertion that it may cause further pain in those already suffering from rheumatic illnesses.

"It is best to avoid showering at night if you already have a rheumatic disease. Or if necessary, use warm water so it does not recur," he told AFP on October 13, 2021.