US newspaper did not take down online article criticising Nigerian separatists


A post shared hundreds of times on Facebook claims that The Washington Times removed an online story about a Nigerian separatist group led by Nnamdi Kanu who is facing charges of terrorism. This is false: AFP Fact Check found that the opinion piece by US academic Ivan Sheehan remained live on the newspaper's website.  The screenshot shared in the post was doctored.

The post was published here with a purported screenshot from a website featuring the Washing Times masthead and the message: “This story is no longer available on the site”.

“Guess what? Washington times USA is too small to write fake stories about IPOB. They just removed the fake story on their website (sic)” the post's author wrote. 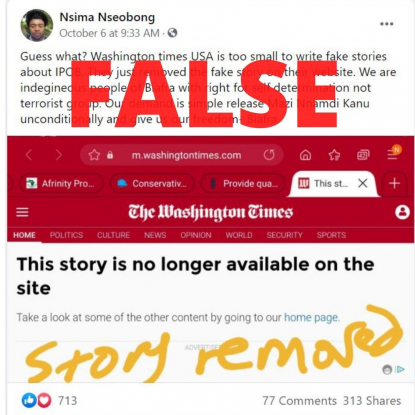 A screenshot taken on October 11, 2021, showing the false post

IPOB stands for the Indigenous People of Biafra (IPOB), a separatist organisation in Nigeria led by Kanu, who is currently awaiting trial for alleged crimes bordering on "terrorism, treason, running an illegal company, publishing defamatory material and illegal possession of firearms". In recent years, the group has established a militia wing known as the Eastern Security Network (ESN), leading the Nigerian government to declare IPOB  a terrorist organisation.

Sheehan, meanwhile, is an American academic who specialises in global terrorism, counterterrorism, US foreign policy, and international conflict management at the University of Baltimore.

Earlier in October, Sheehan wrote a column in The Washington Times calling on the US government to designate the Indigenous People of Biafra (IPOB) in Nigeria as a foreign terrorist organisation.

“As soon as the designation is applied, no organisation that utilises US currency would be able to legally conduct transactions with the organisation. By cutting off IPOB’s funding, the US would weaken the 50,000-strong paramilitary outfit and provide Nigeria’s security forces room to train their sights squarely on ISIS-affiliated Boko Haram in the Northeast of the country,” Sheehan wrote in his opinion piece.

His views were widely reported on in Nigeria, as seen here and here, prompting reactions from pro-IPOB social media users.

AFP Fact Check found that Sheehan's piece remains accessible here on The Washington Times website. Archived copies of the article show no updates or corrections to the content from October 4, 2021 to October 12, 2021.

AFP Fact Check found 20 snapshots of the story taken at different times by users of Wayback Machine, a digital archive of the internet. They all show the article has remained online.

A screenshot taken on October 13, 2021, showing an archived version of the article

The newspaper’s correction policy also states that if an article is corrected, a footnote will be published to the article, stating the changes made. This didn’t happen, either.

AFP Fact Check has asked The Washington Times for comment and will update this fact check accordingly.