Skip to main content
A baggage handler pushes a bag near a Southwest Airlines airplane at Hollywood Burbank Airport in California on October 10, 2021 ( AFP / Robyn Beck)

Social media users including US Senator Ted Cruz and Donald Trump Jr suggested that mass flight cancelations by Southwest Airlines were caused by a strike in opposition to mandatory vaccination. This is false; the company said inclement weather and a staff shortage prompted the cancelations, and the pilots' union said claims of industrial action were unfounded.

"American media have blacked out the massive anti-mandate protests overseas so the Southwest strike might come as a surprise, but it's not to anyone who's been watching pro-freedom uprisings around the world," former president Donald Trump's son tweeted on October 11, 2021.

His remarks echoed Cruz, who derided US President "Joe Biden's illegal vaccine mandate at work" on Twitter the day before, linking it to widespread cancelations over the weekend by the Dallas-based company. 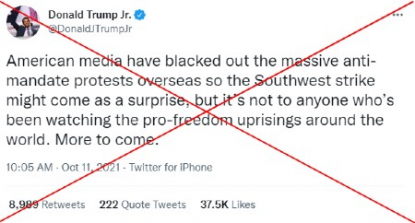 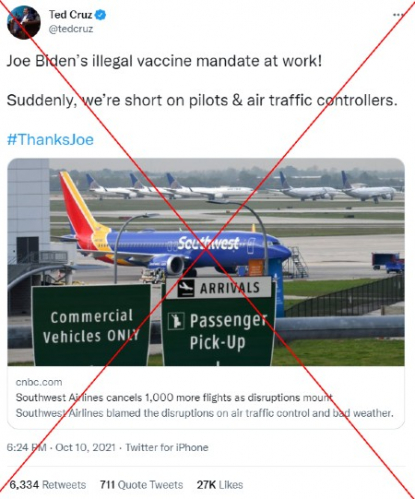 A video posted on Facebook hailed the alleged strikers as heroes. But there is currently no strike at Southwest Airlines.

The company announced on October 4 that it would require all employees to become fully vaccinated by December 8 to comply with Biden's Covid-19 directives for federal contractors.

Five days later, Southwest Airlines apologized for "a high volume of cancelations throughout the weekend" caused by "ATC (air traffic control) issues and bad weather," before later acknowledging that staffing issues were also part of the problem. The company offered buyouts and extended leave to employees when air traffic collapsed during the Covid-19 pandemic, and was overwhelmed as vaccinations spurred people to travel again.

The carrier later addressed claims of a vaccine mandate strike, saying that "the operational challenges were not a result of Southwest employee demonstrations."

"There are no work slowdowns or sickouts either related to the recent mandatory vaccine mandate or otherwise," it said, adding that the union "has not authorized, and will not condone, any job action."

The US Federal Aviation Administration (FAA) also dismissed the strike claim, saying on Twitter that "none of the information from Southwest, its pilots union, or the FAA indicates that this weekend’s cancellations were related to vaccine mandates."

Amy Robinson, spokeswoman for SWAPA, said that "there is no strike at all."

Robinson pointed out that the pilots' union did file a lawsuit in August to keep the company from imposing new Covid-19-related work rules while it engaged in collective bargaining with SWAPA. Southwest Airlines and the union have been trying to negotiate a new agreement since March, she said.

When Southwest decided to impose vaccination requirements, the union argued that  the company had decided to violate the collective bargaining agreement to secure revenue as a federal contractor.

It stated that "SWAPA is not anti-vaccination, but we do believe that, under all circumstances, it is our role to represent the health and safety of our Pilots and bring their concerns to the Company."

Southwest Airlines spokesman Chris Mainz said that "we've heard from employees with varying opinions about the mandate.  Southwest acknowledges there are various viewpoints regarding the Covid-19 vaccine."

To fall in line with new federal regulations, most major US airlines began to require employees to get vaccinated, with United Airlines reporting more workers decided to be vaccinated after it threatened to fire those who refused to comply.

Several hundred American Airlines employees protested that company's vaccine requirements at its Fort Worth, Texas, headquarters on October 7, The Dallas Morning News reported. Although some employees said they considered quitting, no strike was announced.