Facebook posts claiming to highlight historical connections in the lives and deaths of four presidents — two from Africa and two from the United States — have resurfaced online. But the claims they make are partly false: some of the purported historical “connections” are inaccurate. AFP Fact Check investigates them. 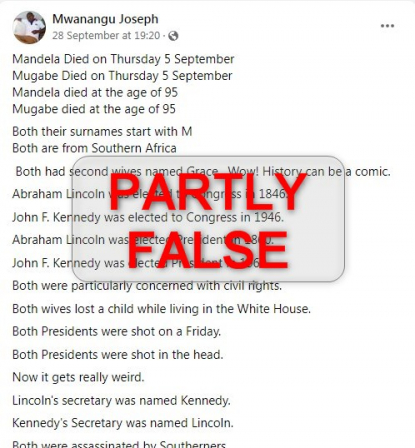 Screenshot of the partly false post, taken on October 10, 2021

But some of the purported historical similarities are inaccurate.

The first claim is that Mugabe and Mandela died on “Thursday 5 September”. In fact, Mandela died on December 5, 2013, while Mugabe’s death was confirmed nearly six years later, on September 6, 2019.

The second claim incorrectly states that both Mandela and Mugabe’s second wives were named Grace, remarking: “Wow! History can be a comic.”

The post also attempts to draw similarities between the 16th President of the United States, Abraham Lincoln, and the 35th, John F. Kennedy, who were assassinated in 1865 and 1963, respectively.

One claim purports that the secretaries of Lincoln and Kennedy were named Kennedy and Lincoln, respectively. Though it is recorded here that Evelyn Lincoln was one of Kennedy’s secretaries, almost a century earlier Lincoln’s two secretaries were John G. Nicolay and John Hay (see here and here).

Another claim alleges that Lincoln’s assassin, John Wilkes Booth, and Kennedy’s killer, Lee Harvey Oswald, were born in 1839 and 1939, respectively. However, Booth was born in 1838.

There have been previous attempts to draw parallels between the lives and deaths of the two US leaders (see here and here), some of which have been used to create conspiracies.