Social media posts circulating online in October 2021 share a screenshot of a message from Facebook that states links from Australian news pages are "restricted". The screenshot has been shared in a misleading context: the posts refer to a temporary ban enforced by Facebook in February 2021 in response to Australian legislation. The ban was reversed less than one week later. A Facebook spokesperson told AFP that no such ban was enacted in October 2021.

"They don't want the world to know what is happening in Australia," the post's caption reads. 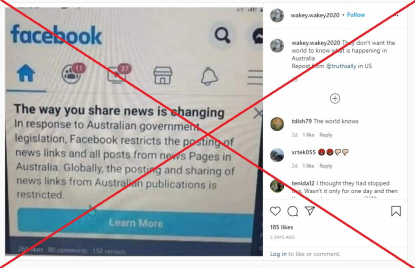 Other instances of the screenshot appeared on Facebook here and here alongside a similar claim.

The posts circulated online after a temporary Facebook outage affecting billions of users on October 4, 2021.

However, the screenshot has been shared in a misleading context.

Although the screenshot is genuine, it relates to an old restriction imposed by Facebook.

On February 18, 2021, Facebook temporarily banned news links and posts from Australian news pages. The move was made in response to laws that would require tech giants to pay news companies for their content.

Facebook reversed the ban less than one week later. The tech giant announced on February 23 it was restoring posts from Australian news outlets following an agreement with the Australian government.

The U-turn was reported here by AFP on February 23.

A Facebook spokesperson told AFP on October 6, 2021 that it "is not restricting any news publishers in Australia”.