This image shows memorial gravestones at a theme park in China

An image of a person scanning a QR code displayed on a tombstone has been shared multiple times on Facebook, Instagram and Twitter alongside a claim that it shows Japanese gravestones equipped with QR technology. The claim is false. The image actually shows memorial gravestones for the Chinese victims of World War II at a theme park in Chongqing, China.

The caption reads: "Technology after death in Japan..!

"The graves of the Japanese are equipped with a special QR code for each grave, which shows you pictures, information and a brief biography of the life of the dead!! / silent art". 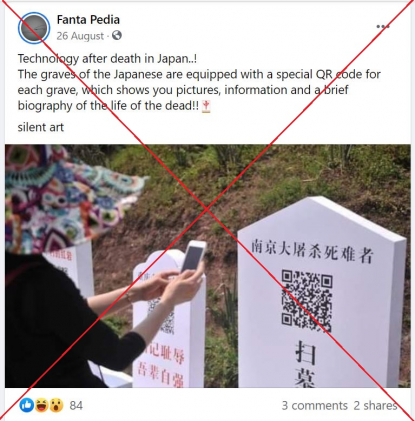 The picture has been shared more than 150 times after it was posted with a similar claim here, here and here on Facebook; as well as on Twitter here and here.

It also appeared on Instagram, alongside a similar claim in the Indonesian language.

The claim, however, is false. The photo shows mock gravestones at a theme park in China.

The report is titled: "Online memorial dedicated to WWII victims".

Below is a screenshot of the ECNS report. 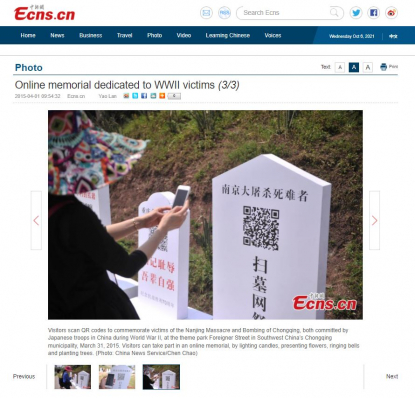 Screenshot of the ECNS report

The photo's caption reads: "Visitors scan QR codes to commemorate victims of the Nanjing Massacre and Bombing of Chongqing, both committed by Japanese troops in China during World War II, at the theme park Foreigner Street in Southwest China's Chongqing municipality, March 31, 2015.

Chinese text displayed on the mock gravestone on the far right of the photo reads: "Victims of the Nanjing Massacre" and "Commemorate online".

Below is a screenshot comparison of the picture in the misleading post (L) and the original photo (R).

China Daily and China.org.cn also reported about the QR codes installed on the memorial gravestones at the theme park in Chongqing.