An image shared hundreds of times on Facebook in Ethiopia purports to show US President Joe Biden wishing a Happy New Year to the Wolayta people — a small ethnic group located in southern Ethiopia. This is false: the image was doctored. The original shows Biden holding a baseball jersey given to him by the Los Angeles Dodgers. Furthermore, the account that shared the doctored image is impersonating the BBC.

The image was published on Facebook on September 26, 2021, and has been shared more than 100 times since 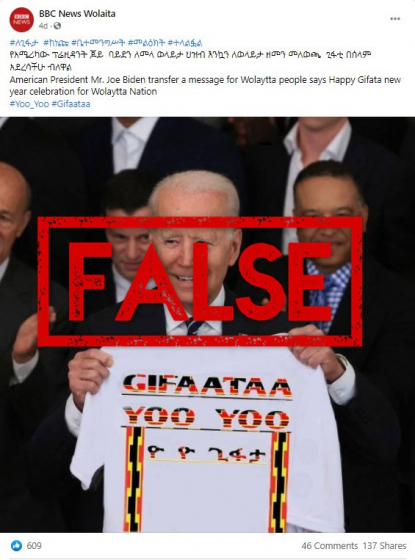 The post was shared on Facebook from a page called “BBC News Wolaita”, which has been online since March 2021 and has nearly 13,000 followers.

Wolayita is located in southwest Ethiopia. According to state-owned media Fana Broadcasting Corporate (FanaBC), officials of the regions are advocating for UNESCO to give “intangible world cultural heritage” status to the “Gifata” New Year’s celebrations in Wolayita.

“Gifata”, also spelled “Gifaataa”, is the New Year festival celebrated in Wolayita in September and on this day, according to Ethiopian newspaper The Reporter, people “get rid of any residual issues of the past year, taking bold moves to reconcile with family and community members regardless the quarrel”. 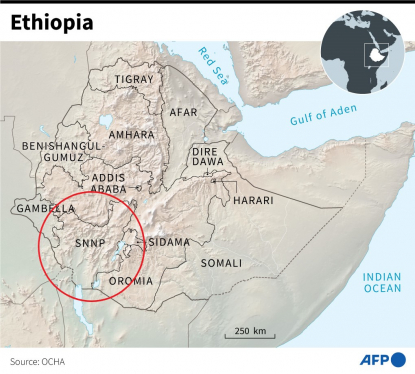 But the claim that Biden wished a Happy New Year to the Wolayta people is false, and the image was doctored.

Photo of Biden with LA Dodgers

The US president wished Ethiopians a Happy New Year in a statement published on the official website of the White House, but he did not specifically mention the Wolayta people.

AFP Fact Check ran a reverse image search and found that the photo was taken in July 2021, during an event held in the East Room of the White House in Washington DC.

The original photograph, taken by Chip Somodevilla, can be found on the Getty Images website. It shows Biden holding up a baseball jersey emblazoned with his name and the number 46, signifying his place in the long line of US presidents. 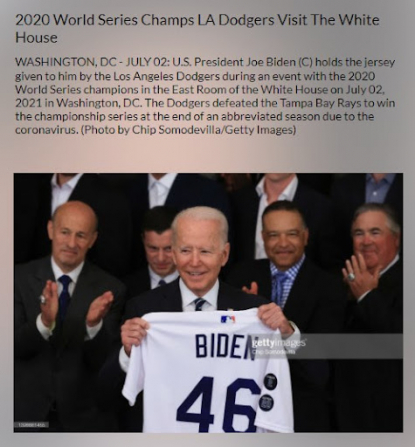 Screenshot of the original image found on Getty Images

At the 3:27 mark in this YouTube video, Biden is shown receiving the jersey, holding it up as the room applauds.

“This Facebook page is fake and was not made by the BBC. Verified Facebook accounts always carry a blue tick,” a BBC spokesperson told AFP Fact Check. 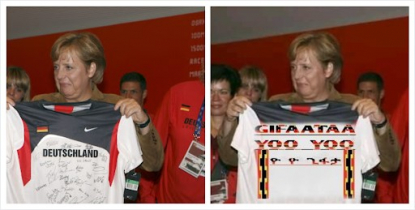 The original image was captured by AFP photographer Toshifumi Kitamura and shows Merkel receiving a T-shirt signed by several German athletes during a visit to the 11th World Athletics Championships, in Osaka, Japan in August 2007.