A photo is doing the rounds in Facebook posts in Bangladesh that claim it shows Prime Minister Sheikh Hasina cooking on her 75th birthday, which she celebrated in September 2021. However, the posts are misleading. The photo was taken in 2013 and shows the leader cooking for her son's birthday.

The image was posted here on Facebook on October 3. 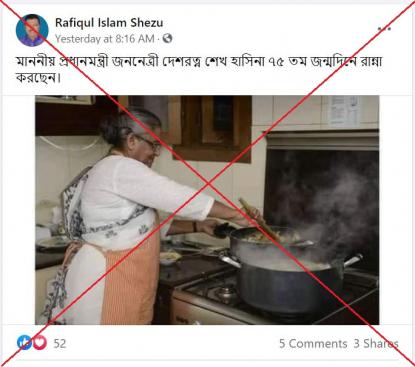 Screenshot of the misleading claim shared on Facebook, taken on October 5, 2021

The photo was shared in similar Facebook posts here, here and here.

"We've got a leader who is an all-rounder!" one person commented on Facebook.

"A special treat for everyone. The Prime Minister is cooking chicken pulao for me! Her pulao is really the best I have ever tasted," he wrote.