Skip to main content
Taiwan's President Tsai Ing-wen speaks at a navy base in Yilan on September 9, 2021. ( AFP / Sam Yeh)

A video of Taiwan's President Tsai Ing-wen receiving her Covid-19 shot at a Taipei hospital has been viewed thousands of times in multiple social media posts alongside a claim there was no needle in the jab. The claim is false: the needle can be seen in other footage taken during Tsai's vaccination. The hospital told AFP that Tsai was vaccinated with a pre-filled syringe which has an undetachable needle.

The video was titled: "Even though she took the shot, no one knows whether it's real or fake".

"'The Emperor's new clothes.' Can't even see the jab's needle. And with the nurse's clever cooperation, of course, President Tsai said she didn't feel a thing! Only clever people can see it," the traditional-Chinese caption reads.

The slow-motion video zooms in as the nurse administers the Covid-19 vaccine, pushing the syringe into Tsai's left arm. The nurse's hand obscures the view of the syringe until it is removed.

An identical video and screenshots of the video were also shared on Facebook here and here alongside a similar claim.

AFP found the footage in the false posts was taken from a longer version of a live-streamed YouTube video published here by Taiwan's United Daily News on August 23, 2021.

Below is a screenshot comparison of the video in the misleading post (L) and UDN's video (R):

A screenshot comparison of the video in the misleading post (L) and UDN's video (R).

In the full UDN footage, the nurse is seen showing Tsai the vaccine before removing the cap and administering the injection.

At the video's 10-minute 57-second mark, the needle is visible when the nurse administering the vaccination hands the syringe to another nurse standing behind Tsai.

Below is a screenshot of the needle as shown in the longer video, with the needle magnified by AFP: 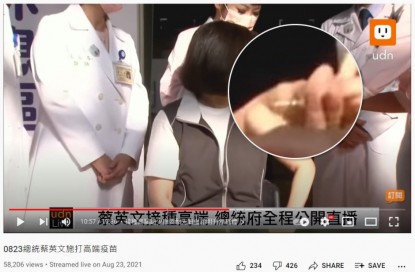 Footage captured by AFP at the same event also shows the needle in the lead nurse's hand after Tsai received her shot.

The needle is clearly visible as she passes the vaccine to the other nurse.

Below is a screenshot from AFP's footage with the needle shown in AFP's magnified image: 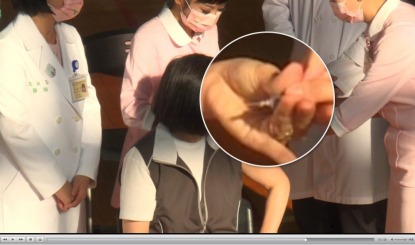 A screenshot of AFP video footage that shows the needle in the jab after Tsai received her shot.

In response to the misleading claim that the syringe used to vaccinate Tsai had no needle, the hospital told AFP the Medigen jab has an undetachable needle.

"The vaccine that the President was injected with is a pre-filled syringe," NTUH told AFP on October 8, 2021. "The vaccine itself comes with the needle. Only the cap can be removed, but not the needle itself".

In response to the claim that Tsai was not actually given the jab, Wen Hui-min, the nurse from the hospital who vaccinated Tsai, said: "We know we are doing the right thing, the correct thing, so that's okay. We have our medical professionalism to uphold and there's nothing further to explain".

Her comments were reported by Apple Daily and United Daily News.

The Medigen Vaccine Biologics Corporation told AFP on October 13, 2021, that the pre-filled syringe used for its Covid-19 vaccines features a 25-gauge needle.

Needle gauge describes a needle's diameter. The larger the gauge, the smaller the diameter.

A 25-gauge needle is the thinnest recommended for intramuscular injection, according to this guide from the US Centers for Disease Control and Prevention (CDC).