Not supernatural: Photo shows tree carved by artist into giant hand after it was struck by lightning

An image of a giant tree trunk in the form of a human hand reaching towards the sky was published in a Facebook post that says it was struck by lightning. However, the claim is missing context: the tree was carved into a 50-foot hand after it was damaged by a storm a decade ago.

“This tree had been struck by lightning,” reads the caption on the Facebook post published on September 19, 2021. 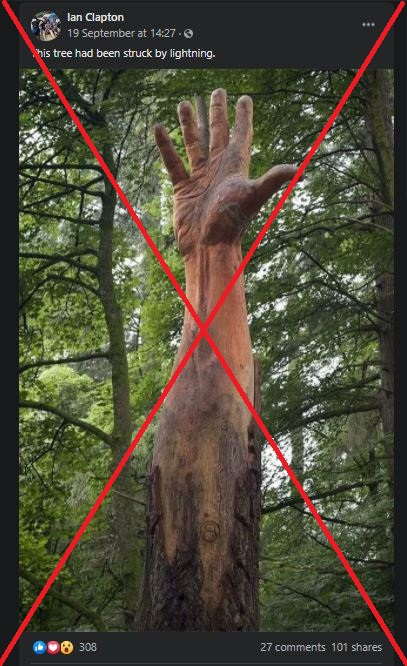 The comments under the post suggest many Facebook users believed that the tree naturally transformed into a hand after it was struck by lightning, although others dismissed this idea.

The post is misleading because it lacks context: while lightning did strike this tree, it did not create the hand shape -- the damaged trunk was subsequently carved by an artist.

AFP Fact Check conducted a reverse image search and found a larger version of the image on a website called Tree Carving, where wood sculptor Simon O'Rourke shares his works. 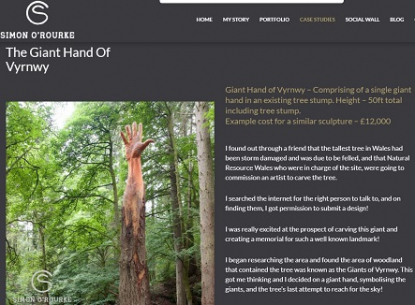 Screenshot taken on September 27, 2021, showing the image on the artist’s website

The sculpture is called the “Giant Hand of Vyrnwy”. O'Rourke said he carved the 50-foot artwork from “the tallest tree in Wales”.

According to local media reports, the tree, which was damaged by a storm, was supposed to be cut down in 2011 for safety reasons.

However, O’Rourke was instead chosen to create a memorial for the iconic tree. The sculptor surrounded the tree with scaffolding and used a chainsaw to carve out the gigantic hand.

Ten years later, O'Rourke published the image of the carving on his Instagram page, describing it as his most popular sculpture.

“The Giant Hand of Vyrnwy was commissioned in 2011 to transform a storm-damaged tree at the Lake Vyrnwy estate. Once 209′ tall, it had to be felled to only 50′. The Forestry Commission wanted it turned into a memorial to the tree it had once been,” he wrote.

“The reaching hand is the tree’s final attempt to reach the sky. I wanted to show the hand stretching and straining; fighting to reach its full height. That's why I highlighted veins and creases, and why there is visible tension and power in the hand.”