A video showing an idol of the Hindu god Ganesha made of oranges is circulating in Facebook and Twitter posts claiming it shows people in Holland celebrating the festival of Ganesha Chaturthi. The posts are misleading; the idol was made for the Bollywood-themed Lemon Festival in France in 2018.

The video was shared here on Facebook on September 18 and has been viewed more than 25,000 times.

"Holland is the orange capital of the world. Every year the locals celebrate the Ganesha festival there, with their best produce. Have a glimpse of the celebration," the caption reads.

The clip shows a crowd gathered in front of a large Ganesha idol made of oranges. A Hindi song, popular during Hindu festival of Ganesh Chaturthi, is overlaid on the video. 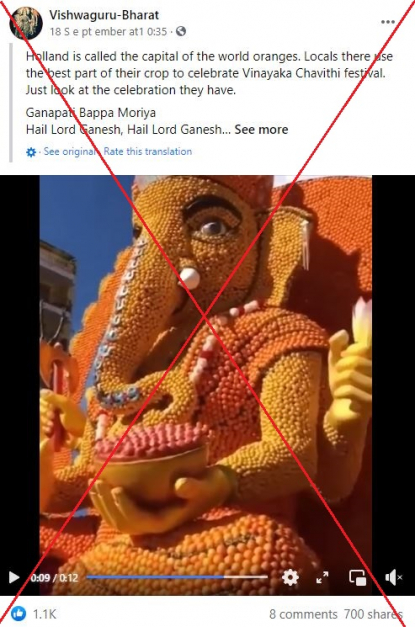 Screenshot of the misleading claim shared on Facebook, taken on October 6, 2021

The video has been circulating online since 2019 after Bollywood actor Arjun Rampal shared the claim from his Instagram account with the caption, "Holland is the orange capital of the world. Every year the locals celebrate the Ganesha festival there, with their best produce. #ganeshchathurthi #Ganpatibapamorya".

A keyword search on Google, and a further search on the AFP photo archives here found an image showing an idol of Ganesha similar to one in the video.

According to the caption of the photo -- which was taken in 2018 -- the Ganesha sculpture made out of lemons and oranges was exhibited during the Lemon Festival in France, not Holland.

The caption also mentions that the theme of the Lemon Festival that year was Bollywood. 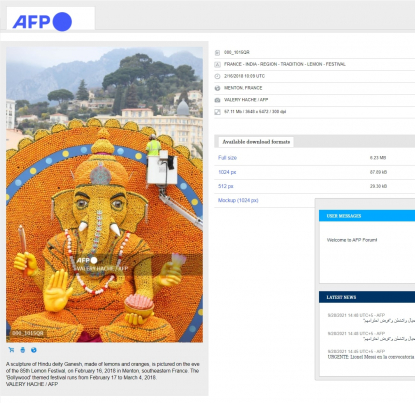 "A sculpture of Hindu deity Ganesh, made of lemons and oranges, is pictured on the eve of the 85th Lemon Festival, on February 16, 2018 in Menton, southeastern France. The 'Bollywood' themed festival runs from February 17 to March 4, 2018," the caption reads.

The Hindu festival of Ganesh Chaturthi, also known as Vinayaka Chaturthi or Vinayaka Chaviti, is celebrated in the autumnal months of August-September every year in India to commemorate Ganesh's arrival on Earth.

The Lemon Festival, or Fete du Citron, is organised annually at the end of the winter to celebrate the harvest of the citrus fruits in Menton, France, with different themes each year.

Below is the comparison between the idol seen in the viral clip (left) and the image found on AFP archives (right): 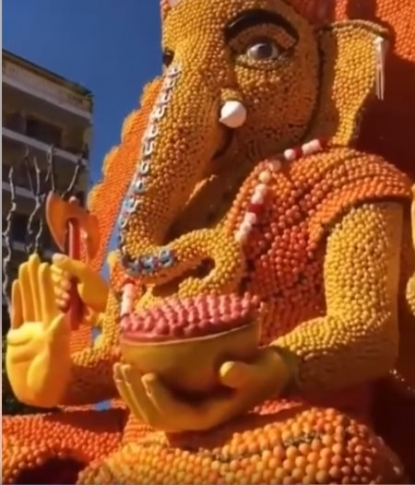 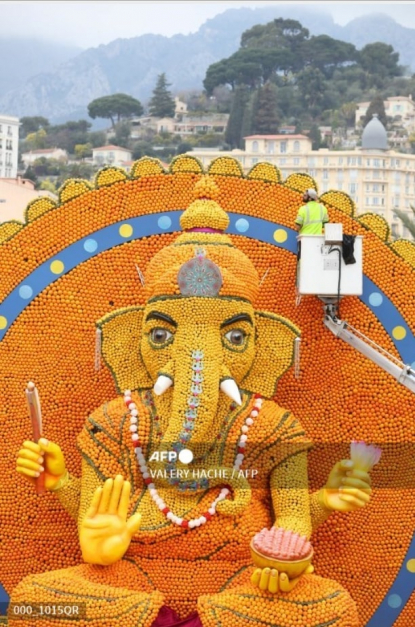 A YouTube video uploaded here on March 15, 2018 shows glimpses of the various exhibits at the carnival -- including the Ganesha idol at the 2:00 mark -- inspired by Indian culture and Bollywood.

Spain-based news agency EFE published an article on the event but does not mention that this idol was made on the occasion of Ganesh Chaturthi or people in Holland celebrate the Hindu festival.