Skip to main content
An email address has been shared on social media all over the world with claims that it will help people recover their lost phones; however, this email leads to a defunct service by police in India that was only meant for residents of Tamil Nadu state ( AFP / INDRANIL MUKHERJEE)

A post shared hundreds of times on Facebook in Zambia and Nigeria claims that people who have lost their mobile phones can recover them by sending the device’s unique International Mobile Equipment Identity (IMEI) number to an email address. But the claim is misleading: the email address cited in the posts is no longer functional and was once used by police in India as an exclusive service for residents of Tamil Nadu state. 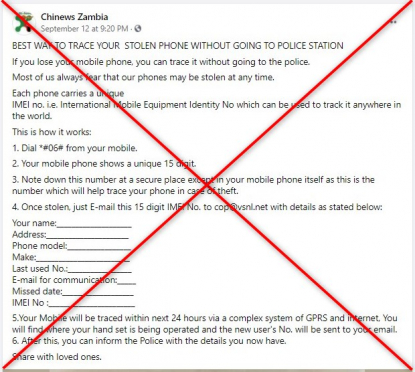 It claims that people can recover their mobile phones by emailing the device’s IMEI number to cop@vsnl.net, thereby avoiding the need to file a police report.

The claim was also shared here on Facebook in Nigeria.

All mobile devices are linked to an IMEI, a unique 15-digit serial number that stores factory information about the phone and allows service providers to trace it via a network.

South African mobile operator Vodacom confirmed to AFP Fact Check that an “IMEI can be accessed by dialling *#06# on a cellphone as the posts claim” and uniquely identifies a specific mobile phone being used on a mobile network.

“The IMEI is a useful tool to prevent a lost or stolen handset from accessing a network and being used to place calls. Cellular owners who have their phones stolen or lost can contact their mobile network provider and ask them to disable a phone using its IMEI number. With an IMEI number, the phone can be blocked from the network,” said Vodacom.

But the claim that anyone can track or trace their lost phones using the email address in the Facebook posts is misleading.

The email address cop@vsnl.net was initially set up by police in Chennai, India as a mobile phone recovery service for residents of Tamil Nadu state, but it is no longer used.

Chennai police told AFP Fact Check by email that “this service was only available to the residents of Tamil Nadu, it was a police helpline email serving only residents of this region. The service was used here, but is no more functional (sic).”

The email address was replaced with a system of lodging requests through an online portal, added the Chennai police.

An article published in India’s The Hindu newspaper in 2006 (and updated in 2012)  described how Chennai police had previously traced 53 missing mobile phones using IMEI numbers sent to the now-defunct email address.

The article corroborated that the service was only available to people living in Tamil Nadu.

A disclaimer on a website with the URL www.copvsnl.net.in  also cautions people against using the email address after Chennai police stopped using it.

Fact-Check Reporter for AFP in India