An image has been shared hundreds of times in social media posts that claim it shows a futuristic railway station in the northern Indian city of Ayodhya. The claim is false: the picture -- which has circulated online since at least 2009 -- shows an artist's impression of a renovation project at New Delhi railway station.

The image was shared here on Facebook on September 20.

The post's Hindi-language caption reads: "This is not London, this is the view of a railway station in Ayodhya".

Ayodhya is a city in the state of Uttar Pradesh in northern India. 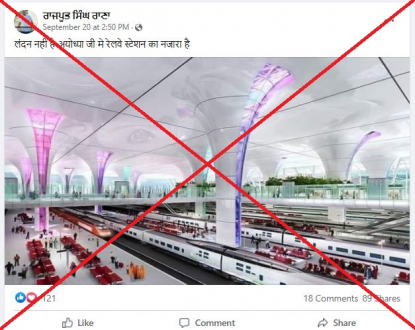 The image was shared alongside a similar claim on Facebook here and here; and on Twitter here.

Some posts claimed the image showed a proposed design for the same railway station. The claim was shared on Facebook here, here and here; and on Twitter here.

A reverse image search on Yandex found the image published in a report by the Hindustan newspaper on February 17, 2020.

The report outlines plans for a refurbishment project at New Delhi railway station.

The report's Hindi-language headline translates as: "The New Delhi railway station will be rejuvenated, the arrival and departure facilities will be linked to the airport".

A keyword search found the same image published in a report by the Indian Ministry of Railways.

It states that the Indian Railways -- a statutory body under the jurisdiction of the governmental Ministry of Railways -- was looking to redevelop several railway stations across New Delhi and Mumbai.

Authorities said the first phase of the 1.8-billion-dollar revamp at New Delhi railway station was due to start in 2022.

A keyword search also found the same image published on the website for British advisory and planning company Arup.

Arup told AFP on September 30, 2021, that the image shows its design for the renovation at New Delhi railway station but that it was no longer involved in the project.

Below is a screenshot comparison of the image used in the misleading post (L) and the image on Arup's website (R):

The development at Ayodhya railway station is set to be completed by March 2022, according to a report published by Hindustan Times on August 13, 2021.

This video shared on YouTube by the Ministry of Railways shows an artist's depiction of the redevelopment work at Ayodhya railway station. It was uploaded on August 5, 2020.