Skip to main content
Police detain protesters at a march against Covid-19 regulations in Melbourne on September 22, 2021 ( AFP / CON CHRONIS)

Facebook and Instagram posts are sharing photos they claim show protesters wounded by rubber bullets at an anti-lockdown march in Melbourne, Australia. The claim is false; the photos were taken after protests in Argentina and the United States.

"Rubber bullets used on freedom protestors in Melbourne, Australia by the police," reads an Instagram post published on September 23.

The post shows graphic photos of three people with injuries, including a woman with a bloodied face and a man's back with several wounds. 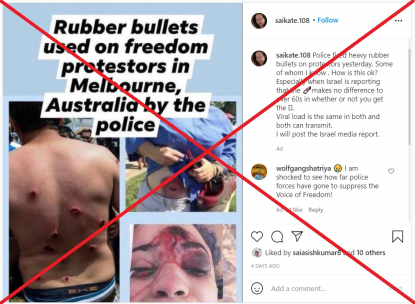 However, the claim is false; the photos were not taken in Australia.

The photo of a man's back covered in wounds was taken in Argentina.

Reverse image searches traced the photo to the archives of AP news agency, which explains it shows a protester who was shot by rubber bullets on December 22, 2015 during a march that blocked a highway leading to Ezeiza International Airport outside Buenos Aires.

"The protesters are former workers from a poultry company that suspended operations, and are demanding unpaid salaries and government aide," the photo caption reads.

Below is a screenshot comparison showing the photo in misleading social media posts (left) and the original AP picture (right).

The photo was also published in an article by La Nacion newspaper, which reported that the protest lasted five days was dispersed by around 250 troops.

The wounded man can be seen in this report by Argentine news station C5N.

The photo of a woman with a large stomach wound was taken in the United States.

Reverse image searches traced the photo to this report by HuffPost, which names the woman in the picture as Methodist pastor Renita Lamkin.

According to HuffPost, Lamkin was shot by police with rubber bullets on August 13, 2014 during protests after the killing of Michael Brown, who was shot dead by a police officer in Missouri in 2014.

The pastor was mediating between the protesters and police when she was shot, the report claims, citing images posted to Twitter showing the wound.

Below is a screenshot comparison showing the photo in misleading social media posts (left) and a photo from HuffPost's 2014 article (right).

The photo of a woman with a bloodied face was also taken in the United States, not Australia.

A reverse image search found the original photo posted to Twitter on May 30, 2020 by Shannyn Sharyse, who claims she was hit with a rubber bullet while taking part in a protest in Louisville, Kentucky against the death of George Floyd.

Below is a screenshot comparison showing the facial wound featured in misleading posts (left) and the original image uploaded to Twitter (right).

Sharyse's post was retweeted more than 68,000 times and gained widespread attention, including from reality star Kim Kardashian West, who offered to help with her medical care.