A 22-second video of US President Joe Biden and Israeli Prime Minister Naftali Bennett at a press conference in the White House has been shared thousands of times on Facebook alongside claims that it shows Biden nodding off. But the claim is misleading: the actual footage is 13 minutes long and shows the two leaders discussing political issues. In the full video, Biden can be seen moving his fingers and responding to Bennett immediately after where the clip claims he fell asleep.

Multiple posts on Facebook, including this one viewed more than 1,200 times, claim Biden was snoozing during a recent meeting with Bennett. “Asleep at the wheel: Biden nods off during visit by Israeli PM to the White House,” the post reads. 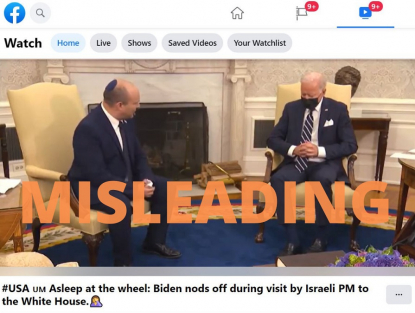 A screenshot taken on September 24, 2021, showing the misleading post

Following the claim, an article by news website How Africa alleged former Israeli leader Benjamin Netanyahu had even poked fun at Biden by imitating someone nodding off.

But the claim is misleading. AFP Fact Check in Slovakia also debunked it here.

Biden and Bennett met on August 27, 2021, at the Oval Office of the White House and held a press conference afterwards. They discussed the evacuation of troops from Kabul, Iran, Covid-19 vaccination efforts in both countries and bilateral relations.

The entire footage of the meeting was published on the YouTube channels of both the White House and the Israeli Prime Minister.

The complete video, uploaded by the White House, shows the meeting lasted a little over 13 minutes. The video uploaded by Bennett’s office includes only the first four minutes.

In the full clip, both politicians shared their views on current political situations affecting the two nations.

However, the short clip shared on social media starts 12’16” into the full video -- beginning when Bennett speaks about cooperation between both countries.

At this point, Biden lowers his head and moves the fingers of his left hand several times, as Bennett says: “So, Mr. President, today, you and I — and you’ve been so generous with your time in these difficult days — you and I are going to write yet another chapter in the beautiful story of the friendship between our two nations: The United States of America and the Jewish and democratic State of Israel — both of us who seek to do good and need to be strong, both of us who are a lighthouse in a very, very stormy world.”

Bennett then concludes: "Thank you, Mr. President, I look forward to working with you today and for many years to come."

Biden replies immediately:  “Well, thank you. And you give me credit, much of which should go to Barack Obama, for making sure that we committed to a qualitative edge you would have relative to your friends in the region. So, he’s the one that deserves the credit.”

Biden's response was omitted from the clip shared on Facebook, creating the impression that he had fallen asleep during Bennett’s closing remarks.

This is not the first time rumours circulated that Biden was sleeping in public. A year ago, AFP debunked similar claims that he fell asleep during a TV interview.