Skip to main content
A customer shops for parkia speciosa, nicknamed "stink bean" and locally known as "petai", at a roadside stall in Kuala Lumpur on June 9, 2020. ( AFP / Mohd Rasfan)

Claim that stink beans can treat cancer and muscle pains is 'not scientifically proven', experts say

A claim has been shared thousands of times on Facebook that stink beans are a "proven cure for all kinds of cancer" and a remedy for various muscle pains. The claim is false: the stated health benefits of consuming stink beans have not been clinically proven, medical experts told AFP.

The claim was posted here on Facebook on September 12, 2021.

The post's lengthy Indonesian-language caption claims that petai — as stink beans are called in Indonesian and Malaysian — is a "proven cure for all kinds of cancer", and a remedy for muscle and joint pains. 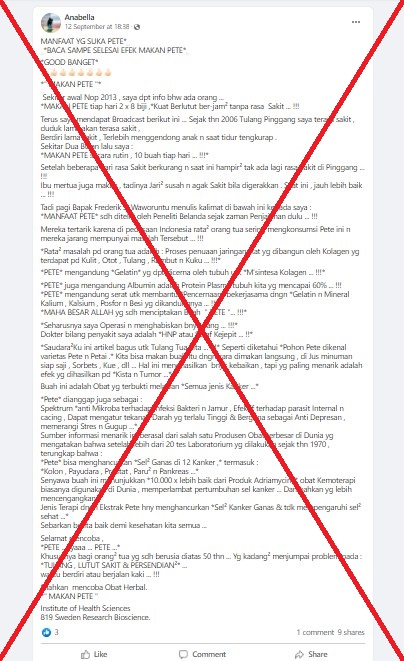 The claim — which has circulated since at least 2018 — has been shared more than 17,000 times after it was shared online here, here, here, here and here.

There has been no scientific evidence to prove that consuming stink beans has health benefits as stated by the Facebook posts, said Zullies Ikawati, a pharmacology professor at Gadjah Mada University, in the Indonesian city of Yogyakarta.

"It's certainly not been proven that there are such effects [from consuming stink bean] to humans. Even if there are testimonies, it is unclear how much stink bean that a human has to eat in order to obtain such effects," Zullies told AFP on September 22, 2021.

There are "possibilities of clinical benefits" from stink beans, however, they are not proven enough to be considered as scientific evidence, Dr Johanes Casay Chandrawinata, a clinical nutritionist at Melinda Hospital for Women and Children in Bandung, told AFP on September 22, 2021.

"All of the possibilities of clinical benefits [from stink beans] are still at the stage of hypothesis, laboratory research on animals and retrospective research, which examines the connection between the incidence of a certain disease with the consumption of a certain food. Therefore, they cannot be considered as scientific evidence to prove that consuming stink bean has clinical benefits," he said.